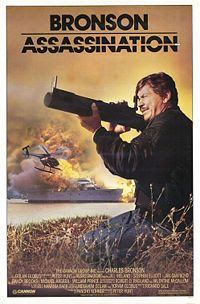 One look on the back of the box artwork and you will notice that the filmmakers committed the ultimate sin.... "Assassination" is only rated PG-13. A Charles Bronson film produced by actionploitation masters Cannon Films and it's only rated PG fucking 13! A Charles Bronson/Cannon film is supposed to be a bloodbath with a body count that rivals "RoboCop" and "Total Recall." This unholy abomination rivals such decisions as toning down "Mad Max: Beyond Thunderdome", "RoboCop 3", "AVP: Alien vs. Predator" and "Live Free and Die Hard" to PG-13 drivel. Not that I'm against the PG-13 rating as I am a fan of many films that are rated this but when I go into a Charles Bronson vehicle, which is EXACTLY what "Assassination" is, I expect violent action. This is like serving pizza with no pizza sauce or a Bacardi and milk with no alcohol (sorry, I had to make a reference the peculiar drink from "Ark of the Sun God")! Sadly, the lack of violent action is not the only problem with this feeble attempt to make another "action" vehicle for the aging and still tough-as-nails Chuck Bronson.

I knew I was in for another late 80's Cannon cheap-jack film when the film's opening credits were composed of aerial stock footage of Washington D.C. complete with music lifted from Cannon's wonderfully cheesy Chuck Norris film "Invasion U.S.A." They didn't even have enough money have a new score composed?! We are then introduced to Charles Bronson who is the head of the secret service. His job becomes a living hell when the new president takes office and he is assigned to protect the bitchy first lady (played by Bronson's real life wife Jill Ireland). Soon she becomes target for assassination so Bronson escapes with her to keep her alive as he investigates and soon finds out the hired assassins are coming right out of the White House! Predicable bickering and sexual tension ensue.

Action director Peter Hunt (director of the excellent Bronson film "Death Hunt" and the underrated James Bond adventure "On Her Majesty's Secret Service") seems to be on autopilot and Bronson's performance seems like he's board, questioning his on dignitary on why he agreed to do such a drab action film. Bronson's wife Jill Ireland does her job as well as she can by making the first lady an absolute bitch that eventually comes around but it's a rather thankless role.

The film is just sloppy. Everything from execution to the writing is just half-ass. Charles Bronson's stunt doubles are obvious, the special effects are laugh inducing (watch for the exploding helicopter!), the plot is completely predictable and the characters are one dimensional. What the hell was up with Bronson's awkward love sequence with his much younger (as half his age) female partner?

"Assassination" is a bad film but all these bad qualities could have been stomachable if it had some good violent action that we crave from Bronson outputs, especially his Cannon outputs. Was "Death Wish" 3 or 4 good films? Hell no but there were awesome due to the fact they were so gratuitous with the violence and action that they almost became live action cartoons. Those were trashy entertainment! Assassination is not focusing more an a lame romance subplot and ends up an extreme disappointment from the Cannon factory. The sad part is that this was one of Jill Ireland's last films as she was sick with breast cancer at the time (she even wears a wig during the movie). It's a damn shame that her last film she would make with her husband would be something as forgettable as "Assassination."

Written By Eric Reifschneider
Posted by Cronosmantas at 5:14 PM