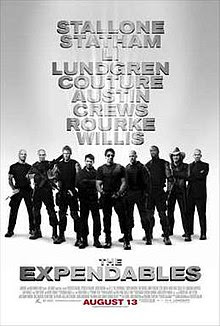 People have dreams. Some dream for money. Some dream for world peace. I, when I sleep at night, dream of less inspired things. I dream of watching Dolph Lundgren fight Jet Li. I dream of a room where Stallone, Arnie, and Willis talk about who's going to take a secret CIA operation to bring down a tyrannical leader who is building a drug cartel off an island. "The Expendables" is a dream come to life for this humble reviewer. Although not quite the perfect dream on screen as I would have hoped, its still more than a pleasure to watch the 80s action film reborn in this modern age.

Barney (oh yes, Stallone's character is named Barney) is the leader of an elite Mercenary squad of the world's largest bad-asses. When he is offered a job to take down a military leader on an island, he gathers his crew up (I'd list the awesome actors here but we'll get to that later) and they intend to go down and raise some royal Hell, take down a tyrant, and save the beautiful exotic woman in peril. It's everything basic and cherished in classic 80s action films rolled into one.

"The Expendables" is your basic action film, honestly. Although not to the farce extent that say "Shoot Em Up" was, this film more or less homages all of the classics straight down to its vaguely familiar story line and characters presented. As an action film, it gives us all that we need. A group of seriously manly men using large fists, larger guns, and the largest balls known to man to take down a tyrant in the name of honor, love, and freedom. What's more classic than that?

With more explosions and fist fights then Michael Bay can even shake a stick at, "The Expendables" even delivers on this front. Car chases, gun fights, explosions, and even an airplane attack make enough action to keep the dumber end of the audience delighted. The fights (with fists and knives) are particularly awesome with some stellar choreography (Cory Yuen even did Jet Li's fights) and great moments galore. If action is what you are looking for it's here.

I must also mention the amazing cast represented here. Although it would have been nice to see Snipes and Van Damme accounted for (they were offered but didn't take for various circumstances), the cast is absolutely stunning. As a combination of Action classic heroes and modern ones, the list is seriously one to make eyes glaze over in glee. Although some were not necessarily used to their full potential just having them all in the same film is enough to buy this film.

The film has a surprising amount of legit drama spliced into it. As it focuses in on our two main heroes (Stallone and Statham), it builds a little backing story to give more meaning to the action that it embraces. Although it never really gives us enough on the others, leaving only hints to their backing stories (here's to sequels to key us in!), its this drama that actually makes this film better than it should have been. There is even a very emotional monologue delivery from Mickey Rourke's cartoonish ex-mercenary character that highlight's this film.

As a fan of these classic Action films that I grew up with, "The Expendables" fulfills a need that hasn't necessarily been attended to in a long time in the US. Although Statham has been carrying the weight on his shoulders as of late, its nice to see it finally touched on with modern cinema. Although not quite a perfect film, it does what it intends and has a fine time doing so. A dream is fulfilled now. Guess I'm going to need a new one. Perhaps a franchise?