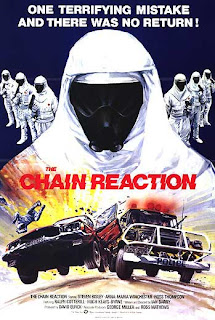 I have a love for the obscure so I hungrily hunt down DVDs and VHS tapes of forgotten pictures and more often then not the films come out bad or to put more kindly, well below average. Every now and again a film surprises me like this forgotten Australian, or "Ozploitation" film. I went into the movie thinking it was going to be some typical disaster cover-up flick and for the most part it still is but it's a dial above the rest of similar natured films. What really surprised me is that that "Mad Max" trilogy director George Miller popped up in the opening credits as producer. This is the guy that created my all time favorite trilogy (well "Mad Max" and "The Road Warrior", I can give or take "Mad Max: Beyond Thunderdome") so I knew he wouldn't attach his name to a film that would be complete shit. To top it off some of the actors and crew members from "Mad Max" worked on this film. For that alone it made this picture an interesting watch.

The film opens with a nuclear plant technician getting dosed with a lethal dose of radioactive water when a spill occurs at the plant. When he learns that the company is going to cover-up the accident even though innocent people in a neighboring town will be affected, he decides to escape and shows up on the door step of a mechanic and his wife. Soon guys in white hazmat suits appear, willing to kill anyone to keep them silent.

Some of actors that appeared in "Mad Max" are here most notably Steve Bisley who played Mel Gibson's partner Goose. Like Goose, he plays basically the same character that is tough with a good sense of humor. Hell even Mel Gibson makes a quick appearance as a mechanic. Don't blink or you'll miss him! The acting is solid helping out the cliché script.

New comer Ian Barry is listed as the director but I wouldn't be surprised if George Miller took the reins from him a few times as this movie feels like "Mad Max" with its gritty style and emphasis on some great car chases. These chases are rousing with the director giving us true high speed pursuits and some nice shots of cameras by the tires.

I did crave more from the contamination plot as it really only affects our mechanic lead and his wife. I would have loved to see the contamination affect an entire town as opposed to a young couple but that might have been too big of scope for the small budget. The film also tends to focus on action sacrificing every other aspect so the audience doesn't get emotionally connected to our couple and the hell that has come down upon them. The ending is also a little hastily tied up but the ride was entertaining getting there.

"The Chain Reaction" is a little bit of George Romero's "The Crazies" and George Miller's "Mad Max" mixed together with a nuclear accident plot. Some fans even consider this a pseudo "prequel" to "Mad Max" which is an interesting point of view. Nothing groundbreaking but definitely worth a watch if you can hunt this rare film down. Considering it being a George Miller production I'm surprised this isn't more readily available, especially in a good quality DVD release. God forbid do not get this film confused with the 1996 Keanu Reeves yawnfest also entitled "Chain Reaction."

Written By Eric Reifschneider
Posted by Cronosmantas at 8:34 PM