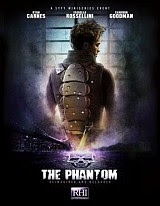 When I first heard of the SyFy reboot of the comic legend "The Phantom" (which was previously done in film form back in 1996), I was terrified. SyFy did this reboot? It had to be utter shit then right? Then I found out that it clocked in at around 3 hours since it was a two part miniseries on the iconic channel. 3 hours?!?! Of course, by this time I was so curious to see it that there was no way I could miss it. Thusly, you are now reading a review of SyFy's 3 hour epic modernization of "The Phantom"!

Chris Moore (Carnes) is a smart kid with good looks and an even more impressive physical prowess that he shows off doing some parkour. His only problem is his restlessness and his memories of odd places and a women in a car accident. When a strange organization finds him, his whole world does a flip. He's actually Kit Walker, son of the last Phantom. When his family is brutally murdered by an evil organization (The Phantom's nemesis) he throws on the updated purple gear and goes on a quest to find out his past, which leads him onto a bigger conspiracy that may lead to an assassination.

"The Phantom" circa 2010 is much better than I had hoped. For SyFy, this is award worthy material. I kid you not. At least its coherent, which is more than most SyFy films. Granted, its still a significantly flawed film that is harmed from some of its length and cheesiness, but its more impressive than I could have imagined.

"The Phantom" does actually have a pretty legit story down underneath some of its low budget and cheese. Updating an older comic like this is tough to do and story wise they hold it down. It's length does get to be a bit much at times and its easy to tell that this was intended to kick start a franchise (or straight up TV show) with its significant amount of character build. It's halfway through the film that the main character actually becomes The Phantom, but it mostly pays off in its own way.

Sometimes the character work is a little much and the film fails to actually utilize its concept and lacks any kind of solid action sequences. What ones do appear are much appreciated although budget constraints and his oddly designed costume undermine the experience a bit. "The Phantom" could have used a bit more bang for its buck here.

The film is also rather hit or miss on its casting. The leads do a surprisingly solid job (nods to Carnes on this one) but the supporting cast is a little shallow. Our villain is pure TV villain cheesiness of over acting and even some of the larger roles seem under-developed and poorly executed, like The Phantom's female counterpart in the organization. This really makes the film feel cheaper than it actually is.

Despite its flaws in some of its design work, casting, and lack of action "The Phantom" still surprisingly feels solid in the end. Definitely one of the best SyFy works I've had the pleasure of viewing and if it leads to more made for TV films or a series I just might have to jump on board for it. Not a great film, but worth checking out for nostalgic sake.

BONUS RANT: Why the hell does everyone fly back 50 feet when shot in this movie? With its added science fiction twists to the story, its not like its pushing for realism here but seriously. It's like bullets suddenly grew the power to carry people in this film. It's the cheesiest part of the whole thing! Well, sans the suit.
Posted by DarkReif at 7:08 PM