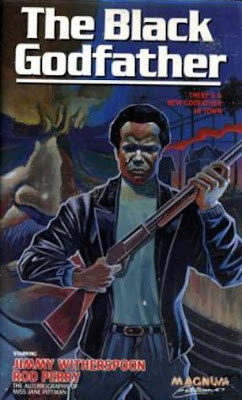 With the popularity of "The Godfather" and "The Godfather Part II" in the early 70's it would only be a matter of time before a Blaxploitation imitation of those epics oozed its way into the grindhouse cinemas. They made "Blacula", "Blackenstein" and "Dr. Black Mr. Hyde" so "The Black Godfather" seems like it's a step in the right direction as now the genre is cloning academy award winning films opposed to horror B-movies. Sadly the combination of such grand films and the interesting Blaxploitation genre didn't come out near as promising or entertaining as one might expect and even the Blaxploitation horror knock-offs are far better than this.

Our film opens up with two goons trying to hold up a place and they both end up shot, one dying and the other being taken in by the "Black Godfather" who in turn saves his life. Our "Black Godfather" takes J. J. (NFL star Rod Perry) under his wing and soon J.J. becomes the black godfather himself and decides to clean up his hood from drugs and starts a personal war against a rival white gang.

The perplexing aspect of the plot is that J.J.'s gang murders and robs which seems to be kosher but drugs pushes their ethical line over the edge. Murdering in cold blood is so much better than selling crack to a teenager...sheesh. That just makes no sense and the thought of it is quite laugh inducing.

The acting is as expected for a low budget Blaxploiation effort but the filmmaking is quite poor. The direction is shoddy, the sound is deplorable, and the editing is sloppy. I even saw the shadows of the camera crew a few times during driving sequences. The score is just dreadful and makes a blood drop from your ear lob after a half hour of having it stab into your eardrum.

With a title like "The Black Godfather" this should have been a monumental effort in the Blaxploitation subgenre. I mean your referencing one of the best films ever made! Thanks to poor filmmaking all around it doesn't live up to the concept and just comes out being another poorly made Blaxploitation effort . It may not be the worst the genre has to offer, but there are many many many more better examples and I only recommend this for viewing for the most hard-core fans.