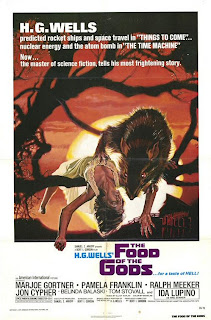 Bert I. Gordon. Look closely at the director's initials. It's B.I.G. and this director lives up to those initials as he loves things in his films to be BIG. He had previously made giant science fiction films such as The Amazing Colossal Man and War of the Colossal Beast in the 50's and he still lived by the mentality that "bigger is better" when the 70's rolled around. When American International Pictures offered him the chance to direct a film version of H.G. Wells' classic story The Food of the Gods he jumped all over the idea. Sadly the final product is a cinematic diarrhea that no doubt makes H.G. Wells turn over in his grave.

When a couple of pro football players decide to take a small vacation to do some hunting on a small island, they discover huge wasps that kill one of their party. Two of the players later return to kill the wasps but find out that insects aren't the only animals on the island to grow to gigantic size due to a strange white substance bubbling out of the Earth (perhaps "The Stuff'?), most notably rats. Now our football players, two scientists and some locals take refuge in a house and frantically try to come up with a plan to escape before becoming rat snacks.

H.G. Wells' original story was a monumental horror idea that was ahead of its time warning the dangerous repercussions of messing with mother nature. Our filmmakers take this concept, throw all credibility out the window to make an unintentionally cheesy (sorry for the pun) monster movie that takes itself stupidly serious. Thanks to this however it does make The Food of the Gods a "so bad it's good" laugh fest for B-movie connoisseurs.

So what makes it so bad? The first part is the awful special effects which were even dated at the time of this film's release in 1976. Bert I. Gordon was also handy in special effects so he loads the film up with unconvincing miniatures, giant fake chicken and rat heads, and forced perspective shots. All these effect techniques could have worked to make the animals believable but AIP and Bert Gordon decide to go the cheap route and the effects come out fake and silly. Second is the truncated plot concept of H.G. Wells' story and our filmmakers just focuses on people being killed by giant fake rats. Our stock players of recognizable character actors also take the silly material seriously adding to the unintentional hilarity.

The Food of the Gods was laughed at for its awfulness when it was originally released and it has gained a small cult following over the years due to this fact. For a silly B-movie it can be fun, even if it does take a shit on a classic H.G. Wells story. Surprisingly a sequel would follow 13 years later with Gnaw: Food of the Gods II.

Written By Eric Reifschneider
Posted by Cronosmantas at 1:39 PM