The Forbidden Photos Of A Lady Above Suspicion (1970) 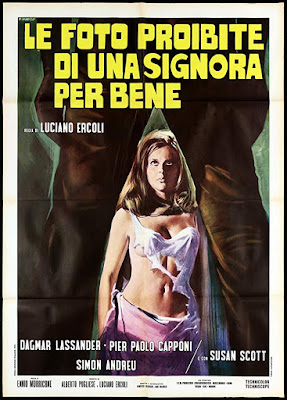 Mysterious and reclusive director Luciano Ercoli is a somewhat underrated Italian director that made a handful of quality giallo murder mysteries in the early 70's. His most memorable film is the wonderful Death Walks at Midnight but his first foray into the genre was the exhaustively long titled The Forbidden Photos of a Lady Above Suspicion and he proves that even at the beginning of his career he had a knack for making good suspense mysteries.

The plot starts with a housewife of a successful business man being cornered by a potential rapist that tells her that her husband was a murderer and that he killed a business partner that he owed money to. She later finds out that one of her husband's business partners was mysteriously killed and then she is phoned by the mysterious man who blackmails her with a recording of her husband admitting to the murder. She agrees to pay the man and even offers up her body but his blackmailing doesn't end there. With the help of her nymphomaniac friend (the beautiful Susan Scott), she has to escape the potential killer and find out the truth about her husband.

Unlike other giallo specialists like Dario Argento, Lucio Fulci and Sergio Martino, Luciano Ercoli's style is a bit more restrained. By this I mean his films rely less on graphic violence and gore and focuses more on plot. Though his films are less violent he still has plenty of sensual nudity that may be tame by today, but back in 1970 this would have been quite shocking and controversial. His style is a bit more elegant compared to his counterparts and his films are beautiful to look at but giallo fans looking for some more extreme elements when it comes to violence and sleaze are better off looking someplace else.

The cast is wonderful and the most memorable is the best friend character played by the gorgeous Susan Scott (real name Nieves Navarro). Navarro was the real life girlfriend of director Luciano Ercoli and I usually despise when directors cast their lovers in pivotal roles. However here it's great as not only is Navarro great to look at, but she's a good actress to top it off. She was so memorable in this film that Ercoli would cast her in the main role in many of his gialli to come.

If I had to make a complaint it would have to be that the film does tend to drag a bit. These dull moments and for the fact that the film is more restrained compared to other films in the genre makes it not as memorable or re-watchable as such films of let's say Dario Argento. It still has a good plot and a wonderful twist at the end.

Fans of Italian gialli will definitely dig this film but fans of the more extreme films that the genre has to offer will find The Forbidden Photos of a Lady Above Suspicion lacking and a bit dull. It's still wonderfully made with a great cast and will make a fine addition to any DVD collector's shelf. 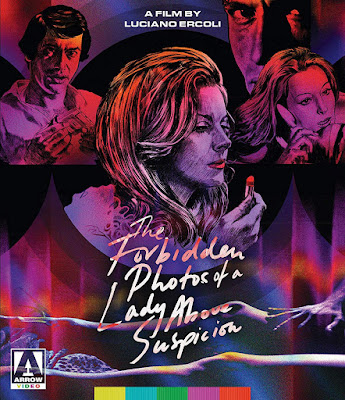 In terms of the film itself, it’s hard for me to make any kind of argument with what Eric has written above about the quality of the film. Forbidden Photos of a Lady Above Suspicion is an impressively made giallo that happens to lean fairly heavily into the dramatic side of the style instead of the exploitative horror or action side that many other films do.  Compared to director Luciano Ercoli’s other significant films of the style, Death Walks at Midnight and Death Walks on High Heels, this one feels like it’s meticulously paced to be more of a full-on character driven mystery than anything else. Certainly, the film smoothly embraces its more erotic tones and the final 15 minutes or so are blissfully outlandish with how many twists and turns they are able to stuff into it, but it’s a subdued giallo in terms of style and atmosphere.

Fortunately, Forbidden Photos of a Lady Above Suspicion is a film that doesn’t need the gimmicks to work. Although the colorful secondary cast does tend to make the more stoic and confused performance from Dagmar Lassander feel almost too drawn back, the rest of the film is impeccably made and Ercoli has a great sense of style that may feel small compared to some of his peers in Fulci and Argento, but is quite effective in its own way. The themes are fantastic to follow and there's a sense of layering that works for the story on hand. It’s not hard to know why this film deserves the Arrow Video treatment and giallo fans are certain to want to add this latest release to their collection.

Arrow Films did their own new 2K restoration of the film from the original camera negative and it’s a remarkable upgrade from my previous DVD version. It helps the film a lot in seeing more of the details that made Ercoli such a striking visual director. The new restorations that Arrow has developed and accrued for their giallo releases has always been impressive, particularly for a genre that’s so visually heavy as this one, and Forbidden Photos of a Lady Above Suspicion is no different. The usual special feature accoutrements are included with the release, such as interviews, documentaries, and a new appreciation for the music. The big reason to get this release though, outside of the restoration, rests in the hands of the film’s new commentary provided by Kat Ellinger who once again does a fantastic job in digging into the context, style, and history of the film for the cinephiles who love the genre.

Fans of giallo may already have a copy of Forbidden Photos of a Lady Above Suspicion in their collections, but this latest Arrow Video release is easily the best one I’ve seen thus far. The restoration is fantastic, the features great, and the commentary ices the cake with another great addition for fans. The film itself is not the most stunning that the genre has to offer, but it’s strengths as a character piece and in the meticulous pacing make it one that fans will appreciate. This release comes with a lofty recommendation.

Written By Matt Reifschneider
Posted by Cronosmantas at 7:26 PM