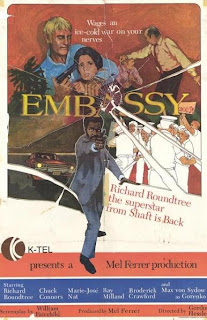 An espionage action film starring "Shaft" and "The Exorcist" would be one helluva thrill ride, wouldn't you think? Richard Roundtree, hot right after his smash hit "Shaft" would follow-up his hit with another amazing film, wouldn't he? That would make too much sense! "Embassy" was the baby of actor/producer Mel Ferrer and it proved to be a costly independently produced bomb well deserving of fading into obscurity.

Max von Sydow plays a Russian defector who seeks refuge at an American Embassy in Beirut, Lebanon headed by Ray Milland and Richard Roundtree. He promises valuable information about the Russians so they agree to grant him asylum. Chuck Conners is a Russian spy who works his way into the Embassy to kill the defector and Roundtree has to figure out how to get him out of the Embassy and to the United States before he is killed.

Sounds like it should be an action-packed espionage thriller right? No instead we get a long talky, bore-fest with some unintentional laugh educing sequences mostly surrounding the Embassy's security system, or lack thereof. This Embassy has to have the worst security program ever to be in a United States government building! First of all Max von Sydow is able to get into the Embassy and then into Richard Roundtree's office while packing a gun! Later he gets drunk (why did they let a defector bring in Vodka anyway?) and ends up stealing the gun of the head of security who foolishly left it on a table. Later assassin Chuck Conners is able to enter the Embassy with a GUN and manages to kill a worker and wound Sydow before being subdued by Roundtree. Wait, there's more! He later knocks out a security guard, takes his gun and escapes but is later captured. He escapes AGAIN by acting sick and tears through the Embassy to find Sydow. This is getting fucking ridiculous! How many times can the security get breached? Pathetic!

Almost the entire picture takes place within the Embassy building and director Gordon Hessler allows the blah backdrop of the film to affect his shooting style as it is completely lifeless. Gordon directed a number of Vincent Price horror films for American International Pictures and his products for that company are Price's worst films under the AIP logo. This guy's track record should have proved to producer Mel Ferrer that he didn't have the skills to command a film with such a powerful cast.

Look at this cast as it's absolutely amazing yet the script and our director doesn't use them to the film's advantage. Roundtree basically plays himself, likable and tough but the character was hardly a stretch for him. The late great Ray Milland sadly is wasted has the chief of the Embassy. Sydow really is the only thing great about this film as his portrayal as the Russian defector is wonderful and he even delivers a believable Russian accent, something Chuck Connors' assassin sorely lacked.

Despite its strong cast, "Embassy" fails miserably at being a taunt espionage thriller and instead of getting the audience on the edge of their seats, it bores them to sleep. I would have feel asleep it weren't' for the ridiculous nature of the Embassy's security system that constantly got me saying "What the Hell!" I decided to be generous and give the film a two star rating just for Sydow's strong performance as the defector. "Embassy" just lacks the essential ingredients to make espionage thriller (notably ACTION) and remains a forgotten film that deserves to stay that way.

Written By Eric Reifschneider
Posted by Cronosmantas at 3:02 PM