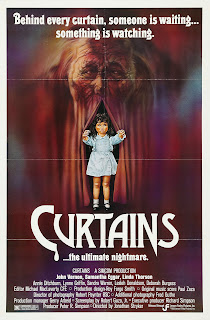 Being huge fan of horror films from the 70's and 80's it means I have an extensive list of horror films I want that have not made their way to DVD. One of these films is the 1983 seemingly forgotten slasher classic "Curtains". One day when marching through a store I found a quadruple feature for a measly $5 which contained a film called "Curtains" mixed with three other god awful looking modern horror flicks. Could it really be the original "Curtains"? The new cover artwork made it look like a crummy direct-to-video remake but sure enough, it was the one, the only "Curtains"! I quickly snagged it up and ran home to revisit a slasher film that I had not seen for years.

Molded in the same vein as slashers like "Prom Night" and "My Bloody Valentine", "Curtains" is a 'who-dun-it' slasher in which the killer is not revealed until the final act. The film opens with a famous director (played by the late great John Vernon) taking his lead actress to a mental asylum to commit her. You see she is a method actor and wants the experience of being around mentally ill inmates to help her with her role. The director is a total dick and leaves her in the asylum. With the help of a friend she escapes when she finds out he is holding a casting call with five women for the role she was supposed to play. Suddenly the women are getting killed off one by one, but who's doing the killing? Movies are a cut-throat (sorry for the pun) business and all these people are willing to kill for the part!

"Curtains" suffered from production problems that caused the release to be pushed back for three years. After shooting began in 1980 the production was halted for the director to be replaced, an actress to be replaced, and for some re-shoots. None of these problems affected the final results of the film and if I didn't do research I would have never thought it had a troubled production. Some of the pacing is off but it still comes out a more solid than one might expect.

The acting is also very good especially for a slasher film. Veteran actors John Vernon ("Animal House", "Killer Klowns from Outer Space") and Samantha Eggar ("The Brood", "The Exterminator") are wonderful like they always are. They really bring an aura of sophistication and class to this genre film. The rest of the cast of young, nimble women is also much better then stock shasher fodder.

Slasher hounds may be disheartened by the lack of onscreen blood, gore and nudity but "Curtains" still has some well crafted suspense sequences, especially a stalk and slash when "hag masked" killer goes after an actress while ice skating. The "hag mask" that the killer wears may not be as iconic as, let's say, a hokey mask but it does the job and looks great on the original poster artwork.

Though not a great horror flick and it does lack some of the excessive attractions such as blood and gore but it's definitely good slasher fare with a solid cast and suspense that deserves to be re-discovered by fans and perhaps someday a better DVD release will emerge. The DVD release from Echo Bridge Entertainment is a watchable full screen VHS transfer that isn't terrible but definitely not good. Spoiled people who live and breathe high definition that refuse to watch rare movies with older format transfers will no doubt hate the release and all I have to say is "fuck off." It's better than having a VHS that could wear out at any moment and people who have never seen it finally have a chance to without resorting to paying high prices for a beat up ex-rental VHS. Perhaps Echo Bridge will eventually re-release the film with a better transfer. They did with "Prom Night" so anything is possible...

Click Here to buy "Curtains" on DVD
Posted by Cronosmantas at 2:25 PM