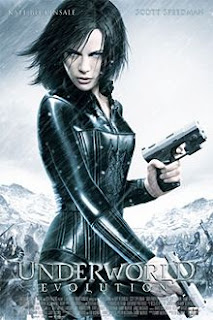 In all honesty, my expectations were quite low for Underworld: Evolution. The first film wasn't great, but was carried over by its charm and style. Could it really work twice? Turns out Len Wiseman made it work twice. Evolution may not be quite as solidified as the original one, but it still sparks a whollup of entertainment and gothic fun with its increasingly violent and epic plot. Hey, I'm always down for a good match between vampires and werewolves no matter how outrageous it's becoming.

Selene (Beckinsale) and Michael (Speedman) are on the run since the events of the first film. Fortunately for them, both the werewolves and vampires are a bit busy with larger problems...mainly new found wolf/bat hybrid Marcus. This ancient vampire is pissed about the events leading to his awakening and decides he wants to bring back his brother William (the original werewolf) and reign hell on Earth. Now its up to Selene and Michael to stop this atrocity before it brings all life and unlife to a halt.

As with the first film, the highlight of Evolution is the style and artistic designs. Although not nearly the rip off of Matrix as it could have been, the gothic art designs gives way to an almost Tomb Raider like plot of putting together a puzzle in ancient ruins that at least gives the film 'more' of its 'own' style. I do miss a bit of that slow motion camera usages that they tone down for the film, but it's made up for by increasing the violence and gore within the film itself (seeing a werewolf's head get torn in half with bare hands...priceless). The film still contains many of its charming aspects, adding in darker villain (or two by the end) and its odd style of blending action, horror, and science fiction. In these ways, Evolution is still a very entertaining watch and earns its merits that way.

Unfortunately, past the surface level of giant bats fighting giant wolves and blood feuds, this is still not a great film. The romantic sub plot is still severely underdeveloped, which was forgivable for one film, but not two in a row and the pacing for the film is hindered by a plot that tries to over-complicate the simplicity of it. Half the time I wasn't sure whether the details were going to come full circle or not because they just seemed to be added there for the sake of adding them there. The world building of the first film gives way to overzealous detailing in this one. The film just either needed to decide to run with the plot or run with the action instead of treading both a little too carefully.

Yet, through and through, when Underworld: Evolution pops up on cable or I find a friend watching it, I'm very inclined to join in, knowing full well that it's not a great film. It entertains, it furthers the mythos they began building with the first one, and it has an increased amount of violence and darkness that adds to its atmosphere. Although I would admit the first one was better, it's not by much, and Evolution does exactly what it intends to do.