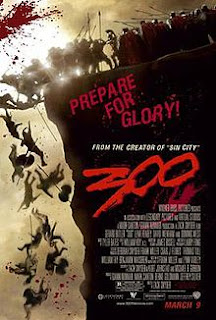 "300" sits in sort of a love/hate spot for me. Partially because its not a very good movie when its stripped down from all of its style and visual glory, and partially because its obvious that this film knows its not very good. This duel reality leads me to love it in all of its over the top ridiculousness, but never lets me forget that it actually could have been a great film.

King Leonidas (Butler) finds himself in a bit of a spot. The Persians have been conquering land after land and their mighty army is knocking on the door of his mighty Sparta. Yet the mystics have banned Sparta from going to war against these foes. Leonidas decides instead of declaring war on the Persians, he will take his 300 mightiest soldiers and take the enemy head on, hoping to stem the tide until the politicians of his people see their lunacy and send reinforcements. Can these 300 Spartans stop an entire army lead by self proclaimed god in time?

Based on the Frank Miller graphic novel, it's easy to see why this film pulls a lot from the style that Rodriguez and company developed for the Miller "Sin City" adaption. It basically looks like a live motion comic with its significant amount of CGI (they even computer generate the abs on the men) and given the talent for visual flair that Zack Snyder has, it works to create a visual feat that is simply stellar. Over the top, oh yes, but very comic book like and epic. Stealing scenes pretty much shot for shot from the comic also helps give it that feeling with the shading/color schemes.

The film is visually arresting and it certainly plays up to the ridiculousness and shoots it to unseen heights. The gore is plenty (all CGI, mind you), the violence is unsubdued, the slow motion non-stop, and random nudity abounds. They play this film up to all those aspects, sometimes to surprising effect (we love violent movies here at Blood Brothers) and sometimes to hilarious effect. Butler seems to always talk with all his teeth bared and a look of insanity in his eyes. Epic, but rather humorous too.

This style is played to it's fullest. Looks like a comic, feels like a comic, even sounds like a comic would. Unfortunately, this hurts the film too. The pacing is shoddy, the story is rather simplified and underdeveloped in many aspects (including a rather misused political back story with the Queen), and the emotional connection with the audience - that is does try and establish - is weak at its best. The potential for its solid story and emotional value is cashed in for visual flair and focuses on the 'bad-ass-ness' of the film. Something I can't entirely agree with.

"300" is a fun watch. It's ridiculous, visually effective, and entertaining as dining in hell, but the film is rather impotent when it comes to investing emotions and pacing - two things which undermine the experience. All in all, Zack Snyder proves strong visually, but the film is much weaker than the soldiers it portrays.