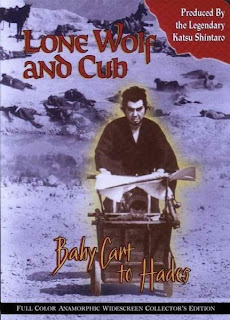 Same year, third Lone Wolf and Cub film. Three films in a series in one year? That's unheard of! This isn't even the last film in the series to be released in 1972! Well franchise fatigue is starting to rear its ugly head as they are pumping these films out at an incredible rate as third entry takes a small step down from the previous two energetic entries. Does that make Lone Wolf and Cub: Baby Cart to Hades a bad sequel? HELL NO! This is actually a terrific samurai film, just not quite up to par with the entries that came before.

Lone Wolf and his son are still roaming the Japanese country side, selling their assassin skills for 500 pieces of gold. While bunking in a motel, a girl driven in to prostitution comes running to his rescue after accidentally killing a purchaser that attempted to rape her. Lone Wolf volunteers himself to be tortured by the ruthless Yakuza family to save her life and in turn is hired by their leader to kill a rival.

Director Kenji Misumi strangely goes for a subdued stylistic approach for this entry and in turn it lacks a lot of the frenetic energy that made the originals so damn enjoyable. He puts far more emphasis on story and characters this time around. Of course this isn't a bad thing but the plot is far less engaging this time around and I found myself losing interest at a few moments. On the plus side the subdued stylistic approach to the plot adds some captivating complex psychological layers to the characters, especially our lead assassin who is just as mesmerizing as ever.

The feel to this sequel is far more reminiscent of s spaghetti western and people that frequent this site know I'm am a HARDCORE fan of that genre, and the films comes to life in its spaghetti western inspired ending where our assassin takes on a hole army of samurai. Thankfully he goes all "Django" on their ass as he has hidden a machine gun inside his baby cart!

From a technical standpoint this entry is just as good as the other films but it still comes out a hair disappointing as it lacks the likable highly stylized delivery of the first two films. Though showing a little of franchise fatigue it is still a damn fine Samurai film full of its trademark blood and violence.

The English Dubbed DVD release of this film features the title Shogun Assassin 2: Lightning Swords of Death on the DVD box artwork. Wait a minute? I thought this was the third film in the Lone Wolf and Cub Series? Well it is but Animeigo titled the dubbed version Shogun Assassin 2 to make it look like a direct sequel to Shogun Assassin, which was the English dubbed release of the first two Lone Wolf and Cub films (Sword of Vengeance and Baby Cart at the River Styx) edited together. So don't be confused, this is the THIRD entry into the series.