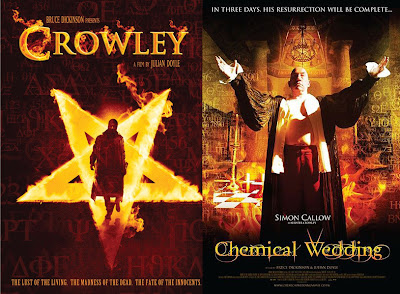 "Chemical Wedding" first garnered my attention SOLELY for the fact that Iron Maiden is my all time favorite band and their frontman Bruce Dickinson penned the script, his first feature film. The film drifted from memory over the next few years as I was unaware that it got re-titled "Crowley" for American release. One day while rummaging through a bargain bin at a local chain store, my eyes fell upon it and decided to plop down a few bucks just to see how 'bad' Dickinson's first foray into horror filmmaking turned out. Well my pre-conceived notion was correct as he needs to stick to writing amazing head banging metal music and keep his little over-achieving fingers out of the horror film market.

"Crowley" is about... who else, Aleister Crowley and the film is loosely, VERY LOOSELY inspired by the real life British occultist. Well we open with Crowley dying of leukemia in the 1940s and then we jump ahead to modern times when an American brings a virtual reality machine... whoa... wait a minute. A virtual reality machine?! Anytime that lame aspect is brought in you know a film is going to turn out to be a turd. Weren't we done with the whole virtual reality shit in the early 90s? Well I digress as the virtual reality machine 'reincarnates' the spirit of Crowley into the body of an elderly professor (Simon Callow) and of course he goes on a 'rampage', of sorts I guess.

If I can praise the plot of one aspect is that at least it's NOT a damn remake. Other that there is absolutely nothing original to this films approach. The ancient devil worshiper that gets killed and then gets resurrected decades later has been done to DEATH. Even the prospect of the villain stealing the guys girl for a sacrifice has spoiled from being overused.

In an attempt the cover-up the inept and tired plot devices, Bruce Dickinson loads the film up with metaphysical mumbo jumbo that just makes the mouthful dialogue a hoot of technobabble. Data of "Star Trek", eat your heart out! It seems when horror films start to mix quantum physics and religion it's just a recipe for disaster. The closest that formula has EVER come to working is in John Carpenter's "Prince of Darkness" but even that resulted in an extremely flawed film product.

Director Julian Doyale, a veteran from many of the Monty Python films and numerous Terry Gilliam projects, brings a nice old school style look to the project, no doubt a nod to the old British Hammer Horror films of the past. Still the films final outlook seems rushed and hurried along in production as the editing is disjointed and the computerized special effects leave a lot to be desired.

The cast for the most part is made up of a bunch of novices and our young professor that's out to save his girl from being made a bride of Crowley is stiff and wooden as the rest of the cast. The one shinning light is Simon Callow who gives a no holds barred performance to the role of Crowley, especially since he no doubt had to bite his tongue extremely hard to stop from snickering at the vulgar and silly dialogue he had to spout out.

I really wanted to like "Crowley" but sorry to say I didn't. The plot is contrived and cliché and I actually ended up laughing more unintentionally at the film than anything else. The only thing really good about the film is Simon Callow's performance and the rockin' soundtrack which contains a few Iron Maiden and Bruce Dickinson tunes. Other than that I believe I have another dust collector to store on my DVD shelf. Sorry Bruce! I guess I better crank up the new Iron Maiden album to help erase this failed attempt at a horror film from memory.