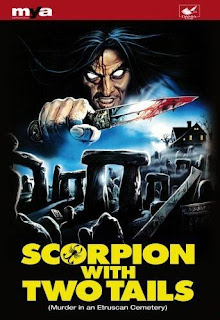 Sergio Martino is hands down one of the best directors in the Giallo genre. Look at this guys credentials: "The Strange Vice of Mrs. Wardh", "The Case of the Scorpion's Tail", "All the Colors of the Dark", " Your Vice Is a Locked Room and Only I Have the Key", and "Torso". These are all fantastic Gialli and makes Martino a contender with Argento and Bava for master of the genre. A Giallo he directed that never makes the list is "Scorpion with Two Tails".... and for good fucking reason.

A young women starts having visions of her archeologist husband being killed and soon it happens for real, just like in her dream. She travels to Europe to find clues and discovers a connection between the newly excavated Etruscan tomb and the head twisting murders occurring all around her.

The plot would have been an interesting mix of Giallo and supernatural horror if it weren't for the poor execution. "Scorpion with Two Tails" (also released as " Murder in an Etruscan Cemetery") was originally intended as a two part television made movie before producers at the last minute decided to make it theatrical feature. The film suffers from this decision as the plot is haphazardly cut up in order to fit a 90 minute running time as opposed to 200. Even once Giallo specialist Ernesto Gastaldi can't get this plot to be anything remotely interesting, no matter how many scenes of maggots or head turnings they write in.

Sergio Martino's direction also has a terrible, made-for-TV look about it. His direction is subdued, almost non-existent. By this time Martino stopped using the 2.35:1 widescreen ratio to shoot his films in and thus out the window went his unique camera angles and fast editing. Due to this the film looks sloppy, cheap and rushed. Hell even the score by Fabio Frizzi is recycled from previous films he has worked on, most notably "City of the Living Dead".

The cast is full of recognizable multi-national Euro cult faces, including John Saxon ("A Nightmare on Elm Street", "Cannibal Apocalypse"), Paolo Malco ("House by the Cemetery", "New York Ripper"), Claudio Cassinelli ("Mountain of the Cannibal God", "Island of the Fishmen") and even Franco Garofalo ("Hell of the Living Dead", "The Other Hell") just to name a few. Even with all these notable actors it doesn't make this forgettable Giallo worthwhile.

Martino will always be a master of the Giallo genre but "Scorpion with Two Tails" was made at a time when his career was starting to wallow. Hell he even decided to use the pseudonym Christian Plummer to hide him from this boring disappointment. This just lacks the wonderful stylistic edge he had earlier in his career and it lacks the trashy entertainment value of his films to come ("2019: After the Fall of New York", "Hands of Steel"). Due to similar titles people often confuse "Scorpion with Two Tails" with Martino's masterful 1972 Giallo "The Case of the Scorpion's Tail". Do not, I repeat, DO NOT confuse "Case of the Scorpion's Tail" with this tedious and weary example of the genre.