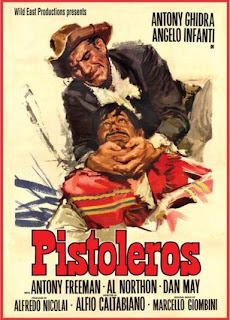 "Pistoleros" is another standard, very typical Spaghetti Western. I guess when you've seen as many as I have (which is pushing 150) chances are you've seen most of the entries that are must sees. Is that saying "Pistoleros" (aka "Ballad of a Gunman") is a complete washout? Hell no as there is plenty of likeable Spaghetti Western ingredients to be had here, including violence, despicable antiheroes and even nastier villains.

We open with a hellacious bandit, who brutally kills riders in a stagecoach for money. Then we cut to a young bounty killer (Angelo Infanti) following an older gunman (Antony Ghidra) as they both have a beef with this goon, which of course leads up to a well staged shootout and a predicable plot twist.

The plot is VERY cliché... two bounty hunters at each others throats but must work together to beat an adversary. Girl gets kidnapped, one gets captured capture and then relies on the other to save him. If you've seen as many Spaghetti Westerns as I have (or even westerns in general) then every aspect of this plot will be extremely familiar. Hell we even have the villains pull a "James Bond" villain move by not killing these guys when they have a perfect opportunity! Sheesh!

Antony Ghidra is actually good in the rough and gritty gunman that has a personal agenda against the renown bandit and he easily steals the screen away from the cocky and arrogant young bounty killer played by Angelo Infanti. However Mario Novelli is the highlight of the movie by playing a complete evil jackass. Now only does he rape and hit women, he even shoots a defenseless dog! That my friend is a hardcore villain!

The production values are extremely low with many of the locations looking nothing more than cheap sets. Still director Alfio Caltabiano works hard to give us some interesting camera angles to spice things up. The shootout towards the end in a collapsing mine is tops however.

"Pistoleros" may be nothing new for fans of the genre but it has enough violence and anti-hero antics to keep fans interested throughout it's running time. This rather obscure Spaghetti Western was given deluxe treatment from Wild East, and of my favorite independent DVD companies.