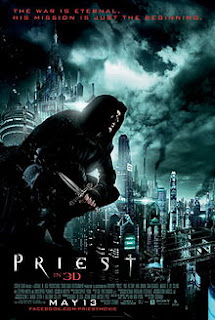 Hot damn, can I pick them lately. All style and no substance. Fluffy visuals and faulty scripts. Guess I should have known that a film from Scott Stewart (director of "Legion") would not be the leap up to the glory that his style seems to indicate. Just like the above mentioned film, "Priest" succeeds on a couple levels: visuals and concept. The rest is a faulty film that seems to never get it all on the same page and sputters its way to an obvious finish that wants desperately to create a new franchise.

In an alternate future, the war between man and vampires has destroyed the Earth. A priest (Bettany), trained to kill vampires as an art before they were shoved into reservations, is called back to duty by a sheriff (Gigandet) from the wastelands to find his niece who was kidnapped by a group of rogue vampires led by a mysterious man named Black Hat (Urban). He goes against the church, who convienently don't believe the story, and heads out to the wastelands to find his family, all the while having to face vampires, other priests told to bring him back, and a new foe...who may just have connections to his past.

What makes "Priest" such a disappointment is that the concept is soooooo fucking cool. It's got this great science fiction and western vibe that brings out this anti-hero like protagonist (who only kills vamps with blades...even cooler) who rides along on his motorcycle through the desert to outposts and reservations hunting for his kin. It's like "The Searchers" meets "Blade" is a weird conceptional way. It's awesome. Partner this with a more than stellar cast of Bettany as our lead, Maggie Q as a priestess out to help, and Karl Urban as the villain and this movie should have blown my socks off.

It doesn't. That's what is so frustrating. It's like the script intentionally half asses everything to ruin this movie. Our hero is annoyingly distant and cold. Urban is horrifyingly underused as our villain (although his maestro of destruction scene is wicked cool looking) and the plot never goes the distance to push its religious overtones and western motifs. How can one screw up a concept as cool as hijacking a train full of vampires monsters from a villain as ideologically cool as Black Hat? They sure as hell do it with its poorly developed characters, half assed dialogue, and irritatingly lack luster pacing.

Stewart does his damnedest though to give it flair. It's visual arresting as a movie with plenty of cool shots, art direction, and special effects. Plenty of slow motion gives a modern edge the the action sequences (the highlight of which being Maggie Q vs the "Road Warrior" inspired motorcycle gang) and the final train heist is fun and energetic. Although the final fight between the priest and Black Hat is a bit anticlimactic, the rest of the film certainly piles on the visual style.

Honestly, the film isn't a horrid watch, but comparing it to the massive potential it had as a concept makes it seem like a complete wreck of a film. It has its style and visual coolness, but its plot hole ridden script and poor character work bury the film's better qualities. Let's hope, if they do a sequel, that it improves its storytelling aspects. Otherwise its just more style before substance.