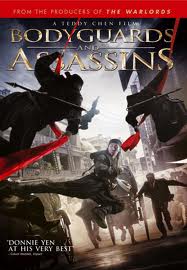 In Donnie Yen's recent kick of being in everything insanely awesome coming out of China and strutting his stuff as one of the best action stars in the last decade, it was only the fan in me that would have to get "Bodyguards And Assassins" even if he is only supporting cast. Don't care. He is that awesome. Luckily, this film rises above its stunningly placed cast as a semi-historical based drama and occasional martial arts flick. It's stunningly well acted and its in depth characters are made light of with solid use of the setting. Not a perfect film, but it's effectiveness at creating the world of 1906 Hong Kong drama and blending it with a plethora of martial arts styles is worth the purchase.

Sun Wen is coming back to Hong Kong to meet with various leaders to discuss a revolution against the Qing Dynasty. This sports a problem for those in power within the government, but since Hong Kong is under British control they can't do much in the public eye. So assassins are sent to stop Sun Wen. This sports a problem for the supports of the revolution in Hong Kong including father/businessman Li Yutang (Wang Xueqi) and his print partner Chen Shaobai (Tony Leung Ka-fai). To counteract this, they ask the favor of many of their friends and allys to bodyguard the leader for just a few hours - including antihero policeman Shen Chongyang (Yen) - leading to a very intense visit that one will not forget.

Although very much portrayed as a martial arts film in its marketing in the US, be forewarned..."Bodyguards And Assassins" is more drama than anything else. It spends at least half of the film building up the tension, setting, characters, plot, and style to give us a foundation for the heart of this film being the Sun Wen visit. As much as it was surprising for me, it's very well done. The acting in this film is superb on all fronts and most every character is well built and completely connectable. Particular nods go to Nicholas Tse as A-Si whose ricksaw puller and family servant whose loyalty and dedication brought tears to my eyes a few times throughout the film. He stole every scene he was in. The only flaws that this film contains in this portion are some of its awkward structuring and some characters who are left a little light in back story (with finger pointed to the beggar character).

With all this build up though, it was only fitting that the visit from Sun Wen be as epic as possible. It is. The chase through the streets of Hong Kong as assassins leap from buildings, shoot arrows from windows, blow up whole houses, and throw down sword fights is nothing short of stunning in many moments. The brilliance behind this chase is in two areas: how long it sustains the chase and how many styles of martial arts they throw in. We have weapon fighting, aerial sword/fan fight (which is very Yuen Woo Pang in style), shootouts with arrows, and of course, Donnie Yen's brutal fist fighting style and a semi-free running sequence. Yeah, its a lot going on and it never loses focuses on what was built on with the characters in the initial run. It's beautifully done and worth the watch alone.

The film does miss out on some great characters with their build and some of the pacing for the film seems rather forced (as if it wanted to say more, but felt inclined to get the plot moving), but overall "Bodyguards And Assassins" rocks its fictional/historical tale to the core with great characters, better acting, and a finale crafted to impress.

Written By Matt Reifschneider
If you want to be swayed by this review, then I suggest clicking on the links below and purchasing "Bodyguards And Assassins" from Amazon to help support the site! Let the kung fu reign!
Posted by DarkReif
Email ThisBlogThis!Share to TwitterShare to FacebookShare to Pinterest
Labels: Drama, Indomina Releasing, Martial Arts