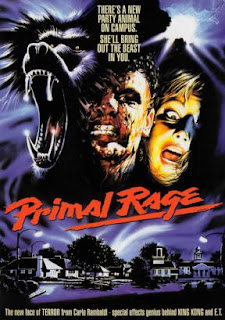 Despite the amazing poster artwork, I went into "Primal Rage" expecting a complete dog turd. Why is that? Well it's due to the fact that it's a late 80s Italian horror film and that era of Italian Horror is generally not well regarded and for good reason. Second it's a late 80's Italian horror film filmed in America with actual live sound (no dubbing) so right away I had horror flashbacks to "Killing Birds" and "Troll 2", crummy American shot Italian horror films made the same way. To be honest, "Primal Rage" actually surprised me by not being a terrible late 80s Italian Horror film, but keep in mind it is still from the end of the decade so it's still not going to be good.

After a crummy title sequence (with the title "Primal Rage" appearing on the back of two female butts marching to the beat of an awful 80s pop song) the audience is told it takes place on an unnamed college campus. Here some overzealous student reporters break into a scientific lab where one of the culprits gets bit by an experimental monkey. He of course develops some kind of "rabies" like disease that brings out the 'primal rage' in his soul and he starts brutally murdering and biting students, spreading the contagion. Can his best friend stop him before it spreads? Trust me, "28 Days Later" this ain't.

As you can tell the plot is nothing we horror fans haven't seen before but that should be expected since screenwriter Umberto Lenzi (under the pseudonym Harry Kirkpatrick) was in a deep valley this stage of his career. Still, even with such a derivative plot, "Primal Rage" comes out far better than anything Lenzi directed himself at this time.

Lenzi also injects a few instances into his script that drive me complete bonkers. First of all why is it when anyone comes down with this disease they refuse to see a doctor or get medical help? Hell I know doctor visits are expensive as hell but when you have blood blisters exploding from your face and blood spewing from your finger nails I think money wouldn't be a matter! Also one of our characters kills an infected person and then burns down his house and the police buy it as an accident. I guess C.S.I wasn't near as accurate back in those days (hmmm... what's this bullet doing lodged in the wall... ah it's nothing. Death caused by smoking bed).

The acting is surprisingly decent for low budget Italian affair, especially since most of the actors are rather green. The only veteran in the cast is B-movie veteran Bo Svenson as our scientist, sporting an awful rat-tail that made me want to yank off violently. The real attraction for this rather obscure film is the good special effects as there is plenty of blood spewing good moments for gore hounds.

"Primal Rage" may have a derivative plot, insane plot devices and plenty of puke inducing 80s pop songs on the soundtrack but the nifty special effects and decent acting kept me interested throughout the running time. That in itself is a feat considering this is a late 80's Italian horror film. Perhaps if the film lived up more to its title it would have become more of a cult classic rather than disappearing into obscurity. The DVD release of "Primal Rage" from Code Red went quickly out-of-print, no doubt because it was a poor seller on DVD. I was lucky enough to snatch one up before it did. For people curious the DVD is wonderful if you can find it for a good price.