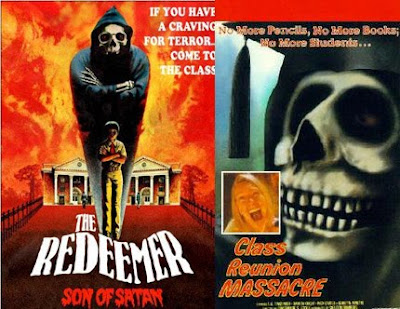 The trailer and some versions of the title ("Son of Satan") give people the false impression that this is some low budget rip-off of "The Omen" or some variation on the satanic horror theme that was so prevalent in the 70s. "The Redeemer" (also released on video as "Class Reunion Massacre") is actually, to my surprise, a full out slasher film that emerged after the success of "Halloween". Though it has fallen into obscurity over the years, it actually held my attention despite being a cookie cutter example of the genre with some absurd plot elements.

6 individuals are invited to their high school class reunion but a deranged priest has an evil plan. It seems he's made a deal with the devil, in a child form known as 'The Redeemer', and slowly stalks and kills our 'sinners' in a locked up abandoned school, Slasher 101 style.

If you've seen slashers before then you aren't going to find anything new here my friend. It's same old, same old as our killer, a master of disguise, changes his appearence before killing each of our victims. None of the kills are especially memorable but I did get a good chuckle out of one guy getting blasted by a flamethrower held by a Howdy Dowdy puppet. HAHA!

The characters are all poorly developed with deplorable writing going into why each one is so 'sinful'. One guy is a lawyer that defends criminals. Whoopee shit. One women is a lesbian. The horror, the horror! These so-called 'sins' as the movie calls them are quite tame. Either kill innocent people for no good reason or really despicable people that deserve the butchering! These people were just uninteresting.

The most ridiculous aspect of our 'plot' is our killer priest. Other than these people being so-called 'sinners', what beef does the have with them and why would he only invite these 6 people? Was he picked on by them as a student? It's never explained. What's even stranger is his pact with the devil kid and how a laughable second thumb on his left hand disappears and re-appears on the devil child when the killings are done and the child returns to the sea of hell. Really, it makes no fucking sense!

"The Redeemer" isn't a horrible slasher but it's definitely not good by any means. The killings aren't overly interesting or original and the driving element behind why the priest kills is completely absurd. Still it kept my attention, gave me a few unintentional laughs (a third thumb... really?!) so it's worth a watch for fans of the obscure or slasher fanatics that are just sick and tired of rewatching "Friday the 13th" and "My Bloody Valentine" for the umpteenth time.