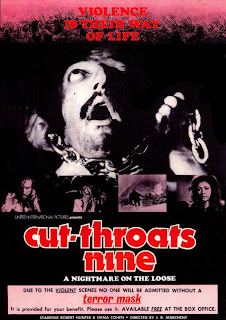 I became aware of "Cut-Throats Nine" when some friends pointed out that it was the most violent, gory 'Spaghetti Western' ever made. Being a huge Spaghetti Western nut I had to hunt a film with such a reputation down so I purchased a bootleg a number of years back but was disappointed in one little detail: this is NOT a Spaghetti Western. Bleak, gory and violent? YES. Spaghetti Western? NO. It's a completely Spanish made production with a Spanish cast and crew. Hell it's not even a western in the traditional sense of the word as even though it takes place in a western time frame, it's actually more of a mountain survival film. Just because I was under the false pretense that this was a Spaghetti Western didn't detour my enjoyment for this nasty little exploitation effort. To be honest I LOVED IT!

From the beginning frame and score one knows this is going to be one of the bleakest, downbeat movies ever made as we get introduced to a chain gang getting transported from a gold mine deep in the middle of the Rocky Mountains with the onset of winter on the horizon. In mid transport their stagecoach gets held up by some bandits, who in turn kill most of the guards. With the stage wrecked a lone soldier with his young daughter (oh this isn't going to boad well) need to lead the chain gang of cut-throat killers to a military camp... but with only 6 bullets and winter right around the corner it's not going to be easy.

"Cut-Throats Nine" lived up to it's reputation of being violent and gory as boy is this film brutal! Director Joaquín Luis Romero Marchent spares no expense to show audiences close-ups of crushed skulls and charred burnt corpses. Lucio Fulci would be so damn proud! What makes the gore and violence so much more disturbing is the serious, bleak tone Marchent gives the picture. He even goes as far as to not allow any bright, cheerful colors to appear in the scheme of the film. Let's just say it's like the tone of "The Great Silence" with Fulci directing and you get the picture.

If I had to complain about one aspect it would be that the film loses some steam towards the end as the film builds and builds with real no payoff and really just wallows to a depressive, yet very appropriate ending.

If you like your films dark, bleak and depressing then "Cut-Throats Nine" is for you. Though full of exploitative gore, it also has some powerful performances and solid directing. It's definitely a film experience you won't soon forget. Not surprisingly "Cut-Throats Nine" bombed at the box office (most people are pussies and prefer 'upbeat' films) but the film as grown a loyal fanbase over the years. Finally, after fans putting up with murky bootlegs, cult DVD company Code Red put out a great release in a double feature with the Fred Williamson western "Joshua." The Code Red DVD is by far the best way to go for fans.