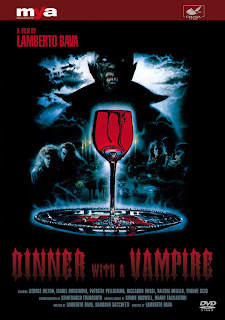 What we have here is the fourth and final full length TV made film by Lamberto Bava for his cable show "Brivido Giallo" (preceded by "Graveyard Disturbance", "Until Death" and "The Ogre"). Bava goes for a more comical approach to the horror, much like his first film in the series "Graveyard Disturbance." I am proud to exclaim that this time around the result is better, if not still seriously flawed by its botched comical approach.

Well we have four wanna-be actors audition for roles in a new horror film by a renowned and reclusive director. They are invited to his castle for a rehearsal and dinner and thanks to the title we know he is a vampire, a vampire sick of living. You see his human side is bored with life and wants to die but his vampire half won't allow suicide as an option so our four hand-picked numbskulls have the night to figure out how to kill the bastard before coming a midnight snack.

Like "Graveyard Disturbance" Bava attempts to mix Italian horror with a teen comedy and the result is a little shaky, but overall a better film product than his previous outing. Much like "Graveyard Disturbance" most of the humor falls flat, and makes one groan more in agony instead of laughing. These four numskulls that our vampire "carefully selected" are absolute dip-shits. I mean if he truly wanted to die then wouldn't he have picked some intelligent horror fanatics with knowledge about vampirism and not airheaded dancers and singers?

Lamberto Bava's wonderful style still shows through its TV production limitations as the film is gorgeous to look at. Bava, like his father Mario and teacher Dario Argento, had a knack for style. The castle location the film was shot at is also beautiful and bizarre, definitely not the typical castle interior with its complex tile designs. Not your typical gothic castle which is a breath of fresh air.

The cast is mostly made up of no-bodies but two really shine. The first is Patrizia Pellegrino, and absolute gorgeous blond Italian pop singer doing this acting gig on the side. She plays, what else, but a singer. Though acting is not her strong point, at least she was great eye candy. The actor that really steals the show is George Hilton, a famous Italian actor mostly known for his Spaghetti Westerns and Gialli throughout the 60s and 70s. He had all but disappeared from the Italian film market by 1986 so it's great to see him back in action, and having a ball doing it.

Though seriously flawed by its failed teen comedy and horror mixture, "Dinner with a Vampire" was still a lot of fun. Bava's wonderful style, despite TV movie limitations, really shines and George Hilton seems to be having a wonderful time hamming it up as a vampire that wants to die. Mix that with another catchy score by Simon Boswell (even re-using a song from "Graveyard Disturbance") and some nifty special effects and you have a really obscure Italian horror feature that should appease fans of Euro cult films.