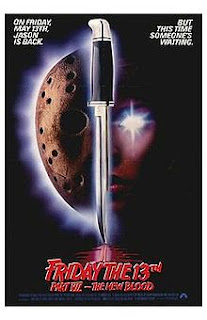 After the (s)laughter inducing effects in "Jason Lives", one would assume that they would continue with the same style even if the film didn't do as well as they assumed in box office numbers. Not the case though and "Friday The 13th Part VII: The New Blood" takes the franchise back towards its original formula...with just a few new additions to make it stand out from the rest. Thusly "The New Blood" is crafted as a one of the most underrated in the franchise with its over the top special effects, darker story, and a telekinetic heroine.

Tina (Shepard) has telekinetic powers. After accidentally killing her father at Camp Crystal Lake in a fury, she has undergone all kinds of testing and doctors. Dr. Crews (Kiser) and her mother (Blu) decide to take her back to where it all started just to see how they can help her overcome her emotional guilt. Unfortunately, with a group of rowdy youngsters renting the house next door and some new old stress bubbling to the surface, Tina accidentally releases Jason from his watery home. Uh oh! It's machete time!

Although many are quick to call out this film's flaws and ridiculous plot (it's Carrie vs Jason!), there is quite a bit to love about this seventh entry. It is over the top in many aspects - like its plot - but at least it has a damn plot. Not to mention, it also has an actual protagonist that one can root for, which is a rare occurrence in these films to being with and she just so happens to be powerful enough (in mind vs Jason's physical immortality) to really hand Jason his own ass many times in the film. Something we just haven't seen in this series yet. Yes, the odd doctor/mother subplot is underdeveloped and the slew of youth next door is cliche in the franchise - but at least it's attempting to feed us something new.

So we have a strong heroine for this entry (even if the acting is hit or miss) and that means we have to pump up Jason for this entry too. The special effects on Jason are amazing - you can see his teeth move in the missing chunk of his hockey mask when his breathes! - and Kane Hodder adds a serious evil subtlety to Jason's already monstrous look. When he is walking up the stairs to get to our heroine, it's frightening even though his is going at a slow speed. Not to mention he does some pretty brutal things like punch through a guy's spine or kill a girl with one swing of a sleeping bag. Killer!

The film isn't great though and many fan's complaints are legit. Many of the kills seemed edited away to be less brutal (as ridiculous as it is to have Jason kill some one with a bladed weed-eater - why didn't they show it?) as if they didn't want to push too many boundaries. Partner this with some hit or miss acting and an ending that makes no sense whatsoever and the film comes out very flawed too.

"The New Blood" might not be the best "Friday The 13th" film out there, but it's more than underrated in the franchise. It has a legit foundation as a slasher and its paranormal elements make for a film that is unique and often hilarious - for example the over zealous house explosion - that gives it an edge on the previous films. A definite favorite for this Blood Brother.