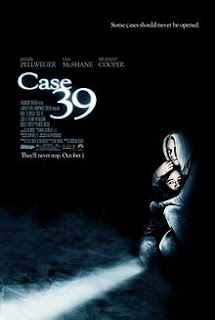 Despite the massive amount of push backs, my expectations for "Case 39" dropped extensively. Only bad movies get dumped off like that, right? Turns out mediocre ones do too. Critics may have panned this film initially, but that never stopped this reviewer before and the results of this supernatural thriller/horror are indeed mixed. Solid execution for the film simply can't raise the film above its relatively basic script and by-the-numbers plot work, leaving a film that is built well but falls under its initial premise.

Emily (Zellweger) just can't help but care for all of her cases. She puts her life and heart into being a child social worker and helping out the needy children that come across her desk. That is until her 39th case. A young girl Lilith (Ferland) seems to be in a questionable home where her parents seem intent on sending her to hell. When Emily wins it over, she even opens her home to Lilith. That is until weird things begin to happen to those around her. Perhaps the girl's parents weren't insane and were onto something...

Evil children films. Seems to be a trend recently with films like "Orphan" and "The Children", yet this one seems very content without pushing the boundaries like the mentioned films. Crossing a style of dramatic thriller that touches on some horror elements (particularly towards the end), "Case 39" has a slick look and well built on screen style. Director Alvart has a charm to his work (see his stellar "Pandorum" for further proof) and the acting from Zellweger and Ferland ably gets the nuances of the characters across for the sake of the film. Even the special effects are effective enough to get some of that tension. These are the reasons that this film scores fairly highly in my book - its effectively transferred to film well.

The major problem that hinders "Case 39" from launching up to match other films of this ilk is the fact that it's simply unoriginal. The scares are predictable (banging doors, demon voices, morph shots) and the general plot progression is easily foresighted. Even with some well shot moments and the believable performances, the film runs on such a highly treaded formula (for both thrillers and supernatural horror) that it simply fails to ignite the same fear and tension that it should have to get the atmosphere it needs.

This all leaves "Case 39" as a good, but rarely great film. A solid rental for those willing to spend a couple hours delving into a standard supernatural thriller that has some above average performances and a solid directorial style. Too bad one can see a handful of other films that take the same basic story and move it in more daring directions.