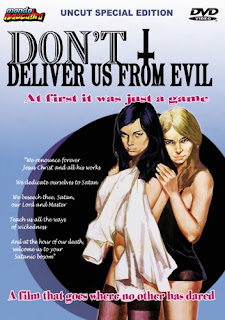 Here is a bizarre little French film I picked up on DVD on a whim while browsing at a pawn shop and from the title and lurid cover artwork I was expecting some silly, comic book style Satanic Euro shocker from the 70s but that's not the case. Instead I was dished up an engrossing, seriously told tale showcasing a character study how two young women are corrupted by perversion and Satan to do heinous acts, hurting innocent victims along the way.

So we have two young women who were raised in strict Catholic households by wealthy families. They bore of their life of in the covenant and find interest in some forbidden readings. Soon they decent into perversion and corruption, partaking in Satanic rituals, seducing men, and torturing and killing animals. These women are deciding a dark path of destruction and they don't care who they destroy in their process.

Though there are exploitative elements present throughout the film, it's never to the over-the-top extent that director Joël Séria could have taken the subject matter. He actually treats the film very seriously with style and accomplished filmmaking, making an engrossing character study how two wealthy women with nothing better to do decide to make trouble. This serious approach to the subject matter made "Don't Deliver Us From Evil" a huge controversy over in Europe with it being banned in its home county for, get this, 'blasphemy'. Hard to believe a film could get banned in for that in today's day in age.

Joël Séria serious approach to the subject matter, mixed with his slower plotting, actually makes this almost an arthouse film. It gets labeled a 'horror' film by most people as for the fact it contains elements usually contained within that genre but 'horror' wouldn't be my first label for the film. It is by far more a drama, with a little horror and exploitation sprinkled on top.

The acting is top and our two young French actresses Jeanne Goupil and Catherine Wagener are astounding in the roles, disturbingly so. There are a few sequences where their actions sent shivers down my spine and truly hated their characters for their actions. They even mix it up by even showing some remorse at some moments which was a thoughtful touch to the war going on in them.

Again this is NOT a mere Satanic shocker horror film from the 70s brimming with poor production values and cheese. This is a seriously taken DRAMA with a little horror and exploitation elements thrown into the mix topped with impressive direction, great acting with complex characters and a haunting score. Due to the serious nature of this film the tone made it rather disturbing, and sometimes hard to watch. Definitely not for the faint of heart and easily offended.