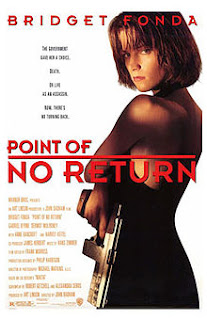 A better title for this film might be "Point-less Of No Return", since its essentially a remake of "La Femme Nikita" that adds relatively nothing new and only takes away the artistic grace that made the original a must watch action film. That being said, "Point Of No Return" is a fine action film that does the story enough justice for its audiences, but loses much of the charm and style that made the original one an instant classic.

Maggie (Fonda) is a drug derelict who after seeing all of her druggie friends get blasted by cops in a botched robbery, kills a police officer in a craze. After being sentenced to death by lethal injection, she awakens in a odd facility where Bob (Byrne) tells her that she has been selected to become an undercover agent. If she refuses, she gets a bullet in the brain. So she sets off on a journey that shows her the life she has been missing - and once she is out on her own, she realizes just how much she has to lose.

Seriously, the first two-thirds of "Point Of No Return" is basically the same fucking movie. Just in English and certainly lacking the artistic license that Besson brought to the original. They use the same story plot elements and even many of the same directorial choices for how the film goes about things. It's just not as good - even if it is the same thing. Fonda does a decent job as Maggie, although the Americanized script brings many of her emotions out in dialogue, which sort of destroys the puzzling aspect of that character and just how far she goes from the beginning of her tale to the end. The film also brings the love triangle to the forefront - which works in some senses and falters in many others. A choices that makes the films underlying messages of redemption and growth more scatter shot than they should be.

The final act of the film, the final espionage mission for Maggie, is where the film certainly drives its own path and makes the film much more fun to watch. Harvey Keitel is a strong choice for the cleaner and his added evil plan is worth the final action sequence itself. Let's just say they changed the the plot enough here to give the film some added individual strength.

The main issue with "Point Of No Return" is that it's a cheesy film that lacks some of the artistic punch it needed to push itself to the next level. Without the artistic choices and oddities of "La Femme Nikita", this story seems like a bad made for TNT sort of late night affair - which is certainly still fun to watch - but never touches on the original in relevancy. Mostly for fans of action films, but my recommendation still goes towards the original.