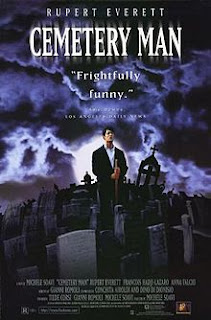 Let me be frank for one moment and just say that my expectations were not that high for "Cemetery Man". I'm not a particular fan of Italian genre films (great directors, horrible scripts) and the rather odd and confusing plot for this film didn't quite jive with my usual tastes. On my brother's repetitive request, I finally broke down and watched this oddity of a film. It blew me away. Quirky, unusual, and completely off the wall aptly describe the film, but the terms efficient, expertly written, and hilarious also describe my experience with "Cemetery Man". A combination that is as lethal in its smarts as it is in style, creating one of my new all time favorite films.

Francesco Dellamorte (Everett) is the grave keeper for a rather small town whose inhabitants are as quaint as can be. Dellamorte and his assistant Gnagi, a bald and rather mentally feeble man, are finding recent times tough. As of late, the dead being buried in the cemetery are coming back to life as zombies only to be dispatched with a blow to the head from his trusty pistol or spade. Afraid of losing his job, he tells no one. When the love of his life appears to mourn her recently lost husband, Dellamorte finds himself spiraling into a world where the living and the dead aren't as different as he thought.

What a strange fucking movie. From its odd beginning and quick introduction to our basic premise and our two protagonists to its mind twisting final act of nightmarish left turns, "Cemetery Man" is a film that's build on that Italian style of illogical plot leaps, but remains completely manageable due to expertly quirky writing/dialogue and a visual style that is piled on in heaps. The film is just fascinating to watch visually as it is to dissect its symbolic plot. This combination of eyebrow lifting mind bends in plot and hilarious situational black humor is perfectly balanced.


Similar to a style that Peter Jackson used in his early career with "Dead Alive" and to an extent on films like "The Frighteners", this film isn't afraid to blend horror, comedy, and drama  into a frappe of entertainment. Everett gives a more than solid performance in the lead with his subtle and often hilarious narration highlighting some of the great moments of the film. Add to that a supporting cast that only raises the ante of his performance (including a heart tugging and quirky performance for his assistant) and special effects to pine over - including a killer looking reaper and plenty of goofy zombie action - this film rocks it on screen with delight.

It must also be mentioned that director Michele Soavi matches the oddity of this script with some of the most clever and unusual directorial work I've seen in a long time. Shots that pull back through TVs, reflection shots off of cemetery puddles, and even a flying zombie head shot where the camera is set in its mouth (oh hell yeah) are all here in abundance. He takes this off the wall script and transferring it to screen with precision.

If you are looking for an off-beat horror/comedy that balances its genres to near perfection and boasts some of the best quotes in decades, than "Cemetery Man" is a must see. It's disturbing, violent, and visually effective all the while being funny as hell. An instant classic.