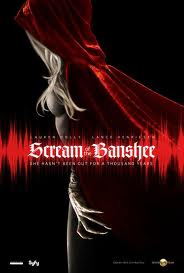 Originally, I was going to give this film a 2 instead of a 1...then I actually started thinking about the film. Despite the potential for some great horror in the concept of a severed banshee head reigning terror in modern times, this film never gathers up enough steam to surpass any of its faulty elements or its low budget. It crumbles under its own idiocy for more often then not and a "surprise" appearance by Lance Henriksen only makes the film feel far more sad to see how far he has fallen.

An archeology professor Whelan (Holly), her team of interns, and her daughter accidentally uncover a box in the basement of the university that contains the head of a banshee captured by the Irish Templar Knights ages ago. When they open the box, they unwillingly unleash the terrible banshee upon the town who begins a killing spree. Only one man obsessed with the box (Henriksen) holds the answer to stopping the terrible monster before everyone loses their lives.

Sounds decent right? It was released by After Dark Originals whose track record thus far has been decent, but when the film started with the SyFy logo though...the air went out of the room. It then followed it up by showing a group of Templar Knights (in drab coloring) behead the banshee with a flying shield that miraculously forms a box over the head to decapitate the monster. Well color me speechless...what an awful way to start this film! Cheap, over dramatic, and nonsensical.

The film only spirals down the toilet drain from there. We are introduced to our protagonists, a group of archeological folk who don't know how to act or give their characters any charm beyond their cliche' blurbs of backstory, and we are on our way to campy town. With the poor character interaction (forced love sub plots? Why the hell not!) and a plot that only gets more nonsensical as it goes, the foundation for "Scream Of The Banshee" is TV made at best and rarely raises my caring level above apathetic.

That's okay. Plenty of horror films lack characters and any sort of thought inducing plot. I just watched the "Friday The 13th: A New Beginning" for pete's sake. Unfortunately, the film lacks any sort of good gore or death sequences to balance out its weak foundations. The special effects are mediocre and rarely make sense - and the death sequences are by the numbers. It's like a semi-violent ghost slasher tale that doesn't find its structure to get things done in any sort of logical manner.

Thusly, go with me on this one and just skip out on "Scream Of The Banshee". It's not even bad enough to be all that unintentionally humorous as it seemingly stumbles its way through a half assed story with half assed production values. One is much better off to see the surprisingly fun "Husk" instead.