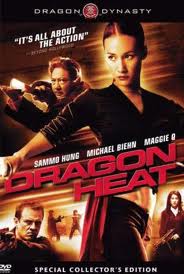 Let me tell you a joke. What do you get when you combine Sammo Hung, Maggie Q, Michael Biehn, Simon Yam, co produced by Steven Seagal, and director Daniel Lee (the director of "Three Kingdoms") together? It's called "Dragon Heat". Still waiting for the joke? This film is the joke. Mashed together like a rehashed crime drama about gangs, cops, and rogue militants all done with enough crappy modern style to make a sensible person's head explode, "Dragon Heat" is like watching a bad joke unfold in front of your eyes. It has its moments, but they are rare and very far between.

A group of international cops are brought into China to prosecute one of the heads of a large gang of gun and drug runners when a rogue militant group (lead by badass Biehn) busts out the leader and holds him for their own gain against the gang. The international group of cops, a rag tag group of undercover agents, snipers, special forces, etc., may have to rely on a leadership of a seasoned cop (Hung) and break a few laws to get to the bottom of these war games.

The film definitely seems promising. A more than solid cast and a concept that sounds like a bullet ballet of the highest standards led me to believe that this film would kick a whole lot of ass. Turns out it does kick ass in many regards, but you better leave the brain at the door and check your logic with the coats as "Dragon Heat" plays it all in style but none of it with sense.

There are a couple of killer action set pieces in the film that highlight it. Sammo Hung's machete fight with his arch nemesis is a wicked cool scene and the ally fire fight certainly gets the adrenaline pumping with lots of shit flying in the air with the bullets. Even the concept of these two sides who must face one another  is brimming with some charm and loaded with interesting characters. The movie just doesn't focus on any of it correctly. Characters are brushed over with quick strokes that turn these interesting people into caricatures and the plot is bounded through at such a lightning pace that it leaves a hundred plot holes and loose ends that the viewer eventually ceases to care about any of it. With much of its poor dialogue just drowning the ill fated characters, the plot has nothing to work with other than attempted memorable quotes and roughly pieced together logic. It's sad really.

It's obvious that director Daniel Lee realized how weak the script was and pushed to make the film memorable by piling on the style and visual flair. I mean piling it on like burying it six feet deep in needless style. Edits are fast enough to give motion sickness, quick zooms in and out blast the screen non-stop, slow motion sequences are thrown in by the dozens, and there is enough pointless flashbacks that even Wes Craven's dog flashback in "The Hills Have Eyes 2" seems legit in comparison. It's a flurry of pointless style that really adds nothing to the story except eye candy to keep on from falling in any of the plot holes.

If you couldn't tell by now, "Dragon Heat" was a pretty massive disappointment. It's weak in the foundations, it's weak in the details, and it's weak in focuses. It desperately tries to grasp onto anything to make itself memorable and modern and only succeeds in being remembered as a failed attempt at a great idea.