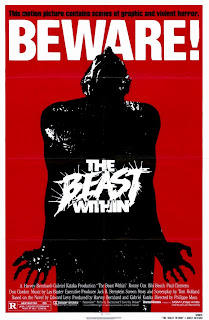 With such awful film credits as "Howling II: Your Sister is a Werewolf" and "Howling III: The Marsupials" to his name, I sure went into Philippe Mora's "The Beast Within" with a well deserving questionable gaze as this guy has some true turds on his resume. However the name Tom Holland (director of "Fight Night" and "Child's Play) credited as screen writer reassured my optimism, as Holland is a tremendously underrated screenwriter and director. Well, I am glad to say "The Beast Within" was far better than I imagined it was going to be but not without a LOT of flaws to help bring its star rating down.

The film opens with an uncomfortable rape scene where a woman is assaulted by a swamp beast. Jump to 17 years later we learn the assault resulted in a child... and he is going through some ghastly changes. It seems his real fathers genetics are awakening and now our young lad with a bad temper and dermatology problem sets out for bloody vengeance against the family that killed his pa.

Though on a basic level it's a simple monster on the loose film, the film still suffers from some major plot issues as many aspects are NEVER explained. First of all why did our youth's mutant pa become a mutant? How does our young fella know the family that killed his pa and all the members? I can't blame Tom Holland's script as the film seems to have had been tinkered with and in the process a lot of the explanations were left on the editing room floor. Apparently, after doing a little research, the beastly transformations have to do with some Native American legend but thanks to the film we, the audience, NEVER know that.

The film is notorious in the horror community, along with "The Howling", for pioneering the use of bladder special effects in transformation scenes... and believe me fans of practicable special effects will get an eye full as our youngster goes through a tremendous transformation into a beast while at a hospital. Fans of gore will also get plenty to sink their teeth into as our beast brutally kills anyone connected with his pa's murder.

Philippe Mora's direction is surprisingly atmospheric and he takes the subject matter far more seriously than one would expect. The moody lighting and the sometimes overbearing score also heighten some of the scares. Still there are a few unintentional laughs to be had, especially during our youths transformation scene when everyone stares in horror, without out shooting or running. Come on guys, get the fuck out of there! This scene would be wonderfully spoofed by Mora in his film "Howling III."

The cast is top for such a graphic monster romp, headed by Ronny Cox as our loving father, a refreshing role before director Paul Verhoeven got a hold of him and turned him into one of the nastiest villains of all time in "RoboCop" and "Total Recall". Paul Clemens gives a virtuoso performance as the teenager before the transformation by conveying pain and confusion without the aid of makeup and special effects in the first half of the film.

As a gooey, bloody monster flick "The Beast Within" works but it's plot holes that were left on the cutting room's floor and a rushed ending makes this sadly an unsatisfactory film by the end. It's still far better than one would imagine with its surprisingly good direction by Philippe Mora and its strong cast. Definitely worth checking out, especially for fans of practical special effects.