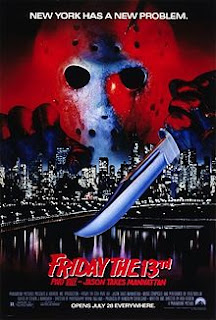 Oh Jason. You and I have been a lot of places together. Most of them Camp Crystal Lake, but never a place like New York. Until this eighth entry into the "Friday The 13th" franchise, that is. My childhood memories of this film are quite ripe with laughter and positive feelings towards the film and watching it with my brother. Unfortunately, many of those memories are skewed and the actual film is nowhere near as awesome or positive (I'll give it entertaining though). Even after high points like parts 6 and 7, "Jason Takes Manhattan" is just riddled with inconsistencies and poorly executed ideas - making it unintentionally hilarious, but rarely a great slasher film even for this franchise.

A group of teens from a local high school by Camp Crystal Lake (who knows what the fuck its actually named by this point) are taking a senior trip by giant ship to New York via our beloved lake. When a giant electrical wire in the water pops Jason (Hodder) awake, he decides to tag along...taking the long awaited trip to the Big Apple. Killing a few defenseless teens and ignorant adults along the way as always.

For someone who has spent as long as I have with this series, watching the films repeatedly and blasting through the series in the last few weeks, this film makes NO SENSE. It's continuity is about as logical as pissing on a transformer. There are so many things new I learned from this movie that none of the others touched on. For example: the old lake is actual a giant harbor that leads out into the ocean. Jason can swim like a fish. Jason can teleport. Jason is a horrible shot (despite nailing a lady in part 3 from long range with a harpoon gun). Jason hates mirrors. New York is rabid with thugs and toxic waste (which could very well be true in real life as I have not been there). Giant ships have only three crew members. It's a good idea to take a row boat into a giant storm at sea. The list goes on and on and on and on and on. This movie has a plot that's built on so many rocky foundations and half fitted logic that trying to follow it makes on psychotically insane.

That's alright though. Many of the "Friday" films don't need a plot as long as there is a gimmick. Like taking Jason to New York, right? WRONG. Turns out he is only there for the last act. Most of it is Jason on a boat. Slaughtering ill developed teens and gimmicky characters that we could care less about. As fun as it sounds, it is repetitive and starved for utilizing the setting to its advantage. He gets to do some cool things like throw someone from the mast and headbutt through a port hole, but its still rather same old same old.

The film does earn some credit for clever shots, some oddly timed humor, and the unintentional laughs it creates through its awful writing and senseless plot points. Had the filmmakers and writers went all out for its ridiculousness and with its setting like they did for "Jason Lives", then this one could have been great. The comedic moments are just classic (the death of the boom box is still the best scene in the film) and even the illogical parts could be hilarious. The ending is so radically illogical (although I can't say it was any worse that part 7) that it had to spur laughter...otherwise my head would have exploded.

Despite getting some solid chuckles out of me, "Jason Takes Manhattan" is a lot of promises where few of them are kept. The kills are basic, the setting is not what its claimed to be, and the attempted plot is bogged down with poor characters and horrible logic. It leaves us with a film that's great for entertainment and unintentional laughter, but not for much beyond that...even for a slasher.