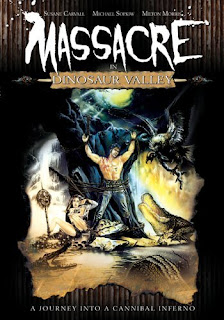 The bloodgate of Italian Cannibal films came to a close in the early1980s but a few did trickle into cinemas throughout the rest of the decade. One of these was "Massacre in Dinosaur Valley" (released in the U.K. as "Cannibal Ferox II"), a film I like to refer to as more 'jungle trash' as the plot has to do with a lot more trashy elements then merely cannibals.

We get Michael Sopkiw, yes the guy from the loveable cheesefest "2010: After the Fall of New York", playing a cocky paleontologist hunting for dinosaur bones in South America. He buys his way onto a flight that is going through Dinosaur Valley, a dangerous and restricted area brimming with valuable dinosaur bones. Predictably the plane crashes and our 'hero' has to lead the survivors to safety while sneaking past cannibal tribes, sadistic slave drivers all while trying to not clash heads with a Vietnam vet survivalists.

"Massacre in Dinosaur Valley" is an exploitation film with a capital 'E'. Exploitation is the name of the game in this horror/adventure film as it is brimming with gore and gratuitous nudity. Director Michele Massimo Tarantini throws everything he can think off into the mix to ensure this is the most deadly jungle adventure ever. I'm talking about piranha, alligators, leeches, psychotic Vietnam vets, quick sand, cannibals, lesbians and even rapist slave traders into the mix! All this insures this exploitation adventure is never going to be dull, that's for sure.

Director Michele Massimo Tarantini was known for directing sex comedies in the 1970s and he brings his knack for comedy into the exploitation genre as I actually found "Massacre in Dinosaur Valley" quite hilarious. Sure many of the laughs were unintentional but I can honestly say I never thought I would laugh this much at an Italian 'cannibal' film.

Michael Sopkiw, though only a veteran of a total of 4 Italian films, really shines here. His previous cornball outings were all serious but the director here allows his humor to show through. Sopkiw is charming, funny and courageous as the lead making the character actually likeable and worth rooting for, a notion usually lacking in these exploitation efforts.

Is "Massacre in Dinosaur Valley" trash? Sure it is, but damn if I can't say it's tasty trash. It's got all the enjoyable exploitation elements cult fans enjoy without going overboard and director Michaele Massimo Tarantini keeps his tongue firmly pressed in his cheek while having the film move at a brisk pace. Sopkiw shines as our likeable hero making this a highly enjoyable exploitation romp. Oh, and forgot the U.K. title "Cannibal Ferox II" as this has nothing to with that Umberto Lenzi shock-fest.

Written By Eric Reifschneider
Posted by Cronosmantas at 1:53 PM