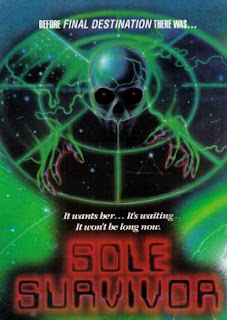 With "Final Destination 5" hitting theaters soon I found it fitting to revisit the 1983 low budget horror film "Sole Survivor", a wonderful forgotten picture that the lame higher budgeted "Final Destination" franchise totally ripped off. Seriously it's amazing how many high budget Hollywood films rip-off low budget rarely seen films from a decade or two before with no credit. There's just enough difference in the plots to not to warrant a legal battle, unlike Michael Bay's "The Island" which completely ripped off "Parts: The Clonus Horror" scene by scene.

A hard working commercial producer miraculously survives and is the sole survivor of a tragic airplane crash. Soon peculiar things begin to happen as you see she wasn't supposed to survive. Now death wants her and soon recently dead corpses rise up to drag her sorry soul to her 'final destination.' Can she outwit Death with the help of a her concerned doctor boyfriend?

The creep factor is high in this engrossing horror thriller as director Thom Eberhardt (more famous for his cult classic "Night of the Comet") crafts each scene to the max with well paced suspense. There are a few scenes that will get your hair to stand up on end... like a scene where a corpse chases our survivor in a dark parking garage. CREEPY!

Budget restraints does hurt the film from time to time. An example is the opening plane crash which can't even be shown. We instead watch a black monitor showing a blip disappear and then we read about the crash. The acting can also be a little shady at times but hardly terrible. Our lead, Anita Skinner, is obviously a novice and I found her performance to be a little less than engaging. The same can be said for our love interest Kurt Johnson as his wooden performance hardly makes his love for our survivor truly seem real.

Even with its few flaws "Sole Survivor" ranks along "Dead & Buried" as one of the best forgotten horror films I have ever seen. Seriously why isn't this film better known? Sure the acting can be a little blow par at times but the sure handed direction and engrossing plot will be sure to suck any horror fan in... unless of course you are one of those horror fans that believes horror is ONLY blood and guts with no suspense or atmosphere. I say hunt this gem down and watch it before any of the shitty "Final Destination" sequels. I recommend buying the Code Red DVD as soon as possible as rumor has it will being going out of print.