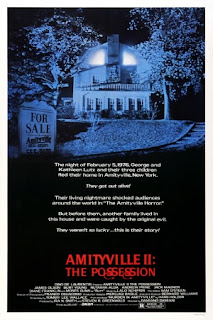 We all knew it was coming. There was destined to be a sequel to a film as successful as "The Amityville Horror", a supposedly true haunted house story that struck a chord with audiences. In comes Italian producer mogul Dino De Laurentiis to unleash his first of two sequels and like the first film this follow-up is based on true events but with one difference. This time it's "prequel" to the famous haunting story. Now I've mentioned numerous times in other reviews that I'm not a fan of prequels as they mostly tell a story that doesn't need to be told. Surprisingly enough though I liked this prequel BETTER than the original. Since the original was mostly a bore and lacked all the tense scares of the novel, it doesn't take much to improve upon it.

The first filmed touched on the murders that occurred in the now famous house in Amityville and here we follow the events of that tragic incident. We are introduced to a family built on shaky relationships who move into the house of their dreams. Soon spooky happenings begin to occur and, since you've seen the first film, we know the eldest son brutally murders his family. Unlike the real life murders, the film introduces a possession twist to the tale and now it's up to a priest to save the boy's life.

This sequel is held with a bitter reception among many fans of the original film as it is bleak, dreary and downright offensive in its approach. This is not the family full of hopes and dreams of the original film. This is a family full of tragedy, including spousal abuse, child abuse and even incest. These are not elements that people find entertainment worthy. Hell to top it off screenwriter Tommy Lee Wallace ("Halloween", "Fright Night Part 2") includes rather brutal child killings.

At the chance of sounding demented I have to say this more gutsy, bitter, rebellious approach to the subject matter is what I respect about this sequel. What the hell was going on in Tommy Lee Wallace's life to write some of this shit? This script is as bitter at life as cocoa on the tongue and I give the filmmakers credit for trying something different and offbeat.

For an odd choice as director, Laurentiis chose seasoned Italian veteran Damiano Damiani who was mostly known for his politically charged spaghetti westerns and crime thrillers in Italy. Oddly enough he brings a ominous, bleak tone to the film allowing it... get this... to actually be scary and suspenseful in parts. Makers of the original film should take note! This sequel just has a downright creepy feel to it... like a haunted house film should have!

The problem this sequel suffers from is a shaky second half. The first half is atmospheric and suspenseful as our family is torn apart from the demonic happenings. After our young man blows his family away the film just falls apart and becomes a shoddy "Exorcist" rip-off with a Priest breaking the guy out of jail in order exorcise the demon that has taken possession. It's just becomes a special effects laden mess and sputters to a quiet death.

Even though the film languishes in its second half, the overall final product is a much more creepy and scary film than the hit processor thanks to atmospheric directing and good acting (Burt Young always plays a great abusive drunk). Most people will disagree as they will find the dreary, downbeat tone of the film despicable but for me it made for a much stronger picture. Yes, I liked a sequel, not to mention a PREQUEL, better than the original film. So sue me!