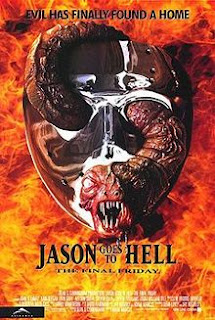 My brother said it best when he said that there are bad sequels and then there are bad sequels that piss you off. "Jason Goes To Hell: The Final Friday" handedly falls into the latter category. This first sequel (and supposedly last one of the franchise...again) for New Line Cinema seemingly homages the previous entries, but deviates from the formula and style so much that its hard not to let the ensuing stupidity of the film bog you down to the point of rage. Yeah, you thought "Jason Takes Manhattan" was bad? You haven't seen anything yet.

After a police trap kills Jason...err...excuse me, BLOWS UP Jason's body, it would seem the world could rest peacefully with the planet's most notorious supernatural serial killer now six feet deep. Not so, my friends. Turns out Jason's supernatural abilities allow him to leap from body to body through regurgitating his heart/monstrous parasite into other people's mouths and now he wants to be reborn. He needs a blood line of the Voorhees to do so though, so he's back to Crystal Lake to find his sister and niece so that he can be reborn.

With an astounding 'what the fuck', "Jason Goes To Hell" certainly takes the old Jason train and derails the entire thing. The plot is absolutely senseless. We're accustomed to random things in this franchise and continuity errors...but seriously? Even New Line can't expect me (or you) to buy into this bull shit. A body hopping parasite/heart that possesses a person as they decay? A bloodline of Voorhees that never existed before...living in Crystal Lake? Hell, Jason (as played by Kane Hodder) is only in the film for the initial destruction and final anticlimactic throw down. It's a whole different movie that happens to use a few details about the "Friday The 13th" franchise!

To top off this crap cake of a plot, the film is horridly executed. The acting is atrocious, particularly from our want to be hero and the horridly used supporting cast, and the directing is as senseless as the plot. Utilizing one of the worst scores known to man to build an atmosphere, this film series collapses under the weight of stupidity. Random slow motion for poorly constructed death sequences, poor modern editing, and laughable special effects just further the down grade of the series into sheer madness. Hey, it does have a cowboy hat wearing bounty hunter named Duke who seemingly knows everything supernatural about Jason even though it never explains how (there's history there...but they don't have the sense to even try to explain). Oh, what a great idea guys...

Simply put: "Jason Goes To Hell" is one of the worst film's I've seen - and one of the worst sequels ever made. It never makes sense. It's never executed correctly. And it sure as hell never works as a "Friday The 13th" film. Even though there have been some bad films in this franchise, none of them compare to the lack of enjoyment one gets from this entry. It's not just a bad sequel...it pisses you off.