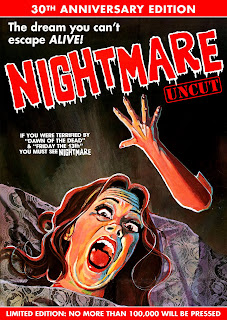 One of the most requested horror films to be released EVER on DVD was the blandly titled 1981 slasher "Nightmare". I however wasn't even born when the film reached theaters and I was never fortunate enough to score my hands on a rare VHS copy so there I sat, patiently waiting or Code Red's wonderful DVD release. Finally the DVD has arrived at my doorstep and now I can honestly say "Nightmare" lived up to its reputation of why it was so sought after by horror mongers. So let's open up the bloodgates and let the slashing begin!

Well we open by being introduced to a disturbed schizophrenic who went off the deep end when he witnessed his father doing a lurid sexual act with a hooker. He of course whips out his trusty axe, decapitates the prostitute and then splits his dad's head open. Years later, while undergoing experimental drug therapy, his doctor unwisely decides to let him out of the hospital. While slumping around 42nd Street, he decides to steal a car and head down to Florida to terrorize a family.

As one can tell from the plot there is a LOT of inspiration from the classic "Halloween". Killing a family member for a sexual act: check. Leaving a psychiatric hospital: check. Terrorizing babysitters: check. Doctor on his trail: check. Shit the only thing this film is missing is that it doesn't take place on Halloween. Hell the director at the end of the film even attempted to give our killer a unique Halloween mask with a trademark pick axe weapon. Michael Myers this guy is not but he'll do.

The acting by our lead psycho is good and his seizures are convincing when he's foaming at the mouth. The rest of the acting ranges from bad to tolerable, as expected from low budget early slashers. Unknown Italian director Romano Scavolini is adequate, ensuring plenty of creepy moments and a weird atmosphere. His script however is clunky, with absurd characterizations. The character that gets my goat the most is our psycho's mental doctor, who seems in a rush to get down to Florida to find the killer but once he gets to Florida, he completely disappears from the film. One would figure he would be the Dr. Loomis from "Halloween" but no dice, just a time waster.

"Nightmare" is most popular amongst horror fans for it's amazing gore effects and trust me it lives up to its bloody reputation. These gore effects are so good that they rank up with maestros' like Tom Savini... so much in fact that he was deceptively advertised as the Make-up artist in the trailers when he only served as a technical adviser.

"Nightmare" lived up to its reputation and definitely one of the best obscure horror films I've seen that fell through the cracks. It's a slasher from the classic era that's both high on sleaze, creep factor and gore so horror fans will be foaming at the mouth just as much as our psychopath in the film. The Code Red DVD release is fantastic, including three different versions of the film in varying quality but all uncut.