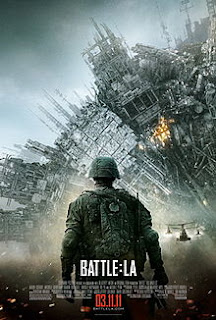 Although alien invasion flicks seem to be a hot ticket right now in theatrically released films (see "Skyline", "Cowboys And Aliens", "Attack The Block", and to an extent "Transformers 3") most of them have been rather mediocre films at best (or haven't gotten a big release in the US). Thusly, I was hesitant to delve into "Battle: Los Angeles" for the obvious reasons - it was a war movie crossed with an alien invasion flick. Sounds like it could have been a recipe for disaster - no pun intended. Luckily, it isn't and for the most part, "Battle: Los Angeles" rises above its cliche concept and gimmicky style to cut out a decent film even if it isn't perfect by any means.

Staff Sergeant Nantz (Eckhart) is only one Marine training squad away from retirement. With his last group of young men about ready for battle, a sudden meteor shower off the coast of LA, puts the military on edge and his retirement on hold. Understandably so, considering that it is not meteors, but aliens who have come to Earth and they are pissed. Now it's up to this group of Marines to go into enemy territory, save some civilians, and knock a crushing blow to the enemy before the military goes drastic and bombs the hell out of LA.

Simple enough story. Not too complex and not watered down enough to make legit science fiction fans scoff at it. To it's benefit, the film very much focuses down on the squad of Marines heading back into LA to retrieve survivors so it doesn't have to be quite the epic and over arching story to make its statement. It does have some interesting places for the plot to progress (the aliens come for our water?) that makes it relatively unique against it's peers. With its war film style of shaky cameras, gritty looks, and semi-realistic dialogue, it's as if we are watching a war film that just happens to include "Halo" inspired aliens as the villains.

Really though, we've see this before. We've seen the style before (even if director Liebesman works his ass off trying to balance the epic big screen look and the gritty handheld realism), so is "Battle: Los Angeles" really worth the hype and acclaim? Partially. What sells this film is the acting. Believe it or not, for a film with both Michelle Rodriguez and pop artist Ne-Yo in it, the cast is pretty well cut. Initially, the film is very by the numbers with its introductions to the squad and there are far too many walking cadavers to give a hoot about. The first third of the film is boring and uninspired in this sense. When about half of these needlessly written characters get knocked off though, that's when the film gets good. The focus goes back to our lead, Aaron Eckhart (who delivers a pretty riveting performance for a film like this), and we are allowed to really get some relationships going with the members of the squad. This sells the film and its style for the latter two-thirds and makes the first portion worth grating your teeth on.

As for the action sequences (what alien invasion film isn't action oriented anymore?) most of them are solid but uninspired. The final throw down is intense for a war scene, but never rises above that in blending the genres and many of the initial fights are too by the numbers to be fun and tense. There is one sequence that is worth every second of time though and that happens to be the bus/freeway escape excursion that really drives home a claustrophobic grit and some intense edge-of-your-seat watching. This sequence is the heart of what this film should have been and is the perfect example of how this film could have worked at its best.

All in all, of each alien invasion flick I've seen thus far in recent memory, "Battle: Los Angeles" is probably one of the better ones. It blends the two styles of war and science fiction well and the cast carries the film out of the gutter when it starts to be too by the numbers in pacing and plot. It has a couple of killer action sequences and the style fits the film. It just never quite reaches the heights that might have been accomplished with a tighter script and a stronger sense of direction for the film. A solid watch that highlights Eckhart as a great actor, but not quite the epic throw down I wanted it to be.

BONUS RANT: Is it just me or does the alien design rather disappointing. The ships are cool with their sputtering style, but the solider aliens look like a fleshy version of Alpha from "Power Rangers". Sounds creepy on paper, but really its just kind of awkward.