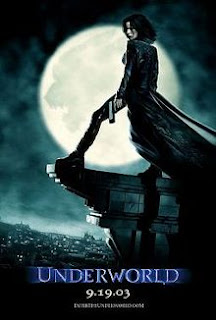 Despite all of this Twilight hoopla that has made vampires the next big thing in the last few years and the subject matter of inter-monster relationships that has spread way too far into the melodrama category, Underworld was one of the first films (along with Blade a few years earlier) to capitalize on making vampires these super cool anti-heroes in this modern cinematic age for young film fans. Although the film is basically a rip off of The Matrix in so many ways, it does contain an extensive amount of charm to its simplified epic tale and its executions. This leaves a film that may not change your outlook on the mythos of any of the creatures involved, but entertains with enough finesse to kick start a franchise that's worth the time.

Selene (Beckinsale) is a Death Dealer, a vampire warrior trained in the hunting and killing of the Lycan (werewolves for those unfamiliar with the term). When she discovers that the Lycans are being lead by Lucian (Sheen) a supposedly dead werewolf leader and they are after a human (Speedman), she abandons orders from her Coven leader to pursue the case...leading her into some serious gun fights and a conspiracy linking back to the days when the War between the vampires and Lycans erupted.

Let's be honest. Underworld is far from a great movie. The characters are charming, but basic and rather depthless beyond the plot - even the romantic subplot between Selene and Michael seems faulty. The plot seems to be this epic tone that adds mythos to many of the already overused creatures of the night, but the film fails to really utilize it beyond its basic storytelling elements and details. It has some great world building techniques that help it out, but the plot to pretty straightforward. And the action sequences, although sleek and well shot, are basic knock offs from the style of The Matrix (hell, the vampires even use the same costumes I think). There is rarely anything truly original about this film. It's hard to be overly impressed with it in this sense.

Yet, there is something to be said about charm to a film. It can fill in many of the biggest plot holes and give strange basic depth to the flattest of characters. Underworld is stocked on charm. Len Wiseman does some amiable things with his debut directorial effort and crafts a quick paced and entertaining blend of action and gothic horror. The use of the slow motion action works well to display the speed of our monsters and his lacking color tonality (is it ever day in this city?) builds quite the atmosphere to build his semi-epic on. The art direction isn't spectacular, but it works - and the special effects blend the CGI and practical effects in effortless ways.

Underworld may not be a film to rewrite any of the genres its represents, but it has style and it has charm - two elements that raise it above its B-movie plot and executions on screen. It may be a werewolf vs. vampire film built on Matrix action sequences, but it certainly feels much more than that...even if its a false sense of reality.