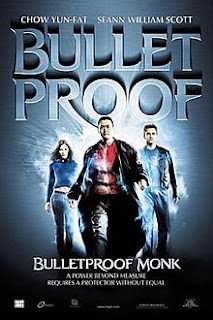 Chow Yun Fat is a remarkable actor. He can take cheesy roles like "Hard Boiled" and make them subtle character studies and he can blend fantastical elements and make them seem real as with "Crouching Tiger Hidden Dragon". Occasionally he does do some awful films, one of which being the American bastardization of kung fu known as "Bulletproof Monk". The film isn't entirely bad, it contains some funny moments and a clever enough buddy cop formula to get the point across, but it isn't good either falling apart at its own ridiculousness and over butchered script/directing.

A monk in the 1940s (Chow Yun Fat) becomes a mystical guardian for an ancient scroll that contains many secrets. When a group of Nazi's slaughters his temple and forces him to run, a continued game of cat and mouse lasts for decades until the monk finds a potential successor in Kar (Scott), a street wise thief who happens to know a bit of kung fu. Now its a race against time for the monk to train Kar before the Nazis close in and take the scroll.

Ah, the old monk on the run from Nazis routine. As if that was a plot foundation that was actually clever enough to be used more often. Combining elements of classic kung fu movies with more action oriented sequences from modern films (ergo ripping off "The Matrix" like every other film from this era), there is actually quite a bit of fun ideas here. Too bad the action scenes are far too silly to truly impress many of the kung fu fans and the story isn't funny enough to impress the buddy cop formula fans. "Bulletproof Monk" sits in this area of not being funny enough and not being action packed enough to please any of the potential fans.

Luckily, Chow Yun Fat is charming as always even at his worst. Seeing him handle two pistols even for a moment was grin worthy and Sean William Scott gets a couple of solid funny man moments for his lack luster character. Despite being a rather unique story though and having a couple of charming actors as leads, "Bulletproof Monk" is about as formulaic as they come - being completely predictable in plot progression and even more predictable in its poorly executed humor. It gets boring. Real quick.

"Bulletproof Monk" is just never enough of anything. It's not funny enough. Not martial arts enough. Not smart enough. Not ridiculous enough (it even has Nazi villains...how did that happen?). The film is a lot of pinches of different things, but never enough of any of it to leave a lasting impression. It is a completely forgettable film that shames many of the films it tries to homage. The potential was there, but it was never executed.