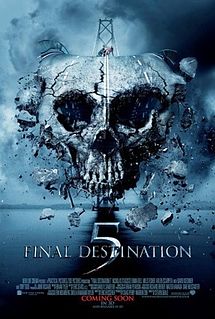 By the second film, the clever "Twilight Zone"-esque cleverness of the plot was already stale and by the fourth film, it was dry, derivative, and senile. Thusly, it was a must see for me to catch "Final Destination 5" (getting back on track with the numbered titles and all) just to see if the franchise could rescue itself from drowning. Ironically, it does. To an extent. It adds in a new twist to the tale and seems intent on making it known from the get go that this film isn't anything to be taken all that seriously. A move that may have saved it from being worse than the fourth entry.

A group of co-workers on their way to a company retreat are saved by Sam (D'Agosto) when he has a premonition that the massive bridge they are on will collapse and kill all of them but his on and off again girlfriend Molly (Bell). Thusly, he saves a handful of his friends from imminent death as the bridge collapses. When they start dying one by one at the hand of death whom they cheated so easily, the remaining friends are told of a way out of the pattern by an odd man (Todd)...by killing someone else and taking the rest of their life as their own. Can these friends cough up the courage to save themselves from death before it comes for them?

Right away the film seems to state that it has no intention of being taken all that seriously. The credits are of random things blasting at the audience through the screen in 3D (is that the "Friday The 13th" font there on the credits?) and the characters are painted with as little investment as possible. There is only enough to get us into the film and get us going on the basic plot. It works even if it isn't a great foundation to build a film on.

From there the film builds itself surprisingly well for a "FD" film. The director is competent enough to engage the tension and red herrings of the death sequences even if logic seems a bit out there and the plot uses its new "twist" (the killing another person in your place) to give us a rather intriguing bit of finale for the the final third of the film as our characters juggle with the idea. Even though the film isn't great on any of these levels, at least its attempting something new and fresh rather than just rehashing it for rehashing sake. The twist may seem a rather sudden in its development (from film experience I wouldn't trust a thing that Tony Todd tells me...the guy is fucking Candyman), but it works by the end of the film enough to make it enjoyable.

As for our death sequences, the opening bridge collapse is certainly the highlight (with all of the 3D effects, its even gorier than ever!) but some clever ones occur here. Not to the comedic extent that the fourth film seemed intent on pushing, with help from a director who makes the ridiculous situations seem dreadful and heart pounding and not being sucked into a swimming pool, the deaths work the nerves nicely even if by mid film they seemed to be just trying to get them out of the way just to proceed with the story line. It's gory, minutely clever, and the tension is finally back. What one expects from a "Final Destination" film, right?

"Final Destination 5" may not be a great film, but it works for the franchise and somewhat gets the series back on track after a horrid last couple of sequels. Will it ever come close to how cool the first one was when it was released? No. But "Final Destination 5" certainly brings it full circle, doesn't it? (Wink wink).