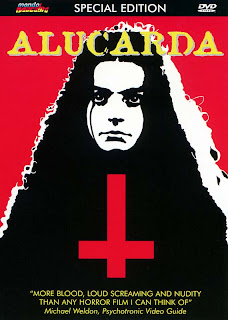 A more apt title would be "Scream and Scream Again" as there has to be more female screaming in this motion picture than any other film ever made. With that said don't go into this visually stimulating but otherwise hollow Mexican horror film with a pre-existing headache or it will make it far, far worse.

We open with two beautiful young women frolicking in the Mexican countryside when they run into a group of gypsies that are up to no good. These gypsies tempt these two young students of the Catholic Church to turn towards evil, so Alucarda and her friend begin to spout all sorts of profanities to nuns as they desperately try to exorcise the demons.

What we have here is Mexihorror nunsploitation effort and like their Italian counterparts in the genre, I'm just not a huge fan. Nuns spouting off blasphemy can only be shocking for so long before it becomes just downright laughable. What this outing has going for it is that it very visually stimulating. Lots of bright, beautiful colors and some memorable macabre sequences, like a young women rising nude from a blood filled casket... ewww!

Like most of the Mexihorror films at the time the production values are really low but stylistic camera shots help make up for the lack of good sets. The most bizarre set has to be the interior of the church which looks more like a macabre version of a mausoleum built in a cave with the statue of Christ sending shivers up ones spine.

Typical with nunsploitation efforts the plot is minimal and takes backseat to the visuals and shocking blasphemy. Satan this, Satan that, full frontal nudity and then a whipping. Thankfully the interesting visuals kept me from falling asleep. Director Juan López Moctezuma also keeps the running time short and makes a rollicking final act when satanic hysteria takes over and Alucarda starts 'burnin' down the house'.

I'm not a fan of nunsploitation horror films as they really have nothing to offer than shocking sequences of blasphemy but this one has a nice look about it that held my interest to the end. For an entry into this questionable subgenre this is definitely one of the better outings and worth a look for fans of the bizarre.

In the U.S."Alucarda" was originally released as "Mark of the Devil Part 3: Innocence from Hell". Has this any connection to the German shock classics "Mark of the Devil" parts 1 and 2? Of course not so don't be fooled by the deception.