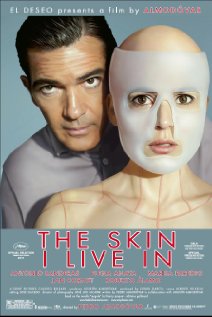 I've seen my fair share of disturbing films. Hell, I would say its practically my job to watch modern distrubing films for Blood Brothers. Half the time I'm rather desensitized to them, which is why "The Skin I Live In" is so damn intriguing. It honestly dug straight into my skin and made it crawl at times. Being unfamiliar with director/writer Almodovar's other work certainly made for one hell of a drop into his style of filmmaking, but it was one that shimmered with a dream like beauty all the while as it masked horrific tendencies and diabolical melodramas.

Ledgard (Banderas) is a world renowned surgeon known for crafting some of the most beautiful people with nothing based on his own terrible life tragedy of losing his wife in a car accident. What his many admirers and fellow surgeons don't know is that he hides a secret. He keeps a woman locked in his house. A woman that he has a strange relationship with. A woman whose past holds just as many dark secrets as his. A woman looking for a way out...

Firstly, "The Skin I Live In" is a fucking beautiful looking film. Almodovar with a keen eye for detail and his great crew give the film a distinctly post-modern 1960s look all the while making present day. Starting off almost like a mad doctor film from old school Universal monster days, the film creates this almost fantastical aura with its often off the wall moments in the massive villa of beauty that hides its true identity. The color palates, costuming, and general artistic choices for the look of the film make this a stellar film to watch for its technical work. Something everyone can admire.

Just like our deceptive lead though, the beauty of the film boils over with its themes of betrayal, gender indifference, sexuality, and vengeance as we are privy to its time jumping plot progressions. As our curiosities are perked by the initial thread, when it unravels its becomes this ultimately disturbing look into the hands of people on the downward spiral of madness. Thrusting extreme moments of rape, fear, and hatred at the viewer to balance out its awkward moments of love that blend together to make the film so damn disturbing in how realistic it seems in this fantastical world.

That being said, its themes and artistic nuances can't save the film entirely. Often enough, the script does odd things to get those moments in there and stumbles through its somewhat awkwardly paced time jumps. Our tiger dressed antagonist in the first act seems almost too cartoonish for how dastardly he is (which I'm sure is the balance they were looking for - it just didn't quite work for me) and the odd details about Banderas' maid made for some soap opera-ish moments that seemed fairly out of left field. Along with its somewhat disorienting time jumps, "The Skin I Live In" has trouble getting the basic story out while navigating its artistic choices.

Still, "The Skin I Live In" packs a whollup of disturbing human intricacies and rides well on some stunning performances and a keen eye for the artistic. It's not perfect (and from what I read, its not Almodovar's best either), but it's enough of a hook to get one into it without sacrificing too much. "The Skin I Live In" is a trip that's enough to make one's skin crawl... and for that it was worth the watch.

Written By Matt Reifschneider
Posted by DarkReif at 10:13 PM