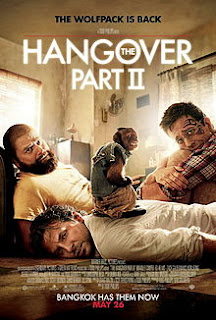 Despite my initial despise for most modern comedies, "The Hangover" had me in tears. It was unique, clever, and completely out there - pushing limits of atrocity all in the name of humor. "The Hangover Part II" tries to recreate this seemingly impossible combination of ridiculous elements that made the original one work. By recreate, I mean copy it scene for scene in the most asinine ways possible. By tries, I mean fails. Fails hard. What made "The Hangover" work was its unique way of going about its script. When its completely carbon copied for its sequel...its hardly unique or all that shocking. Just leaving us with a film that seems like a knock off of its first entry while adding nothing all that new or impressive.

The legendary wolf pack is back, but this time Stu (Helms) is the one getting married. To make matters even more scary, they are getting married in Thailand. To prevent the problems that arose in Vegas, the four friends along with the bride-to-be's little brother decide to stay in for the party...only to awaken with no recollection of the previous night's events in the middle of Bangkok. Now its a race against time for the wolf pack to find the missing brother of the blushing bride before the wedding is to take place.

Taking this great set of very funny guys into Bangkok should have been comedy gold.  At times, it does work. The reemergence of the offensive Chow character adds some delightfully offensive scenes and there are a couple of moments that utilize the Bangkok scenery to its benefit including a staff wielding monk with a hatred for loud mouth individuals. These moments spark with the insightful combination of offensiveness, wit, and timing that made the entire first film work.

Beyond simple moments though, "The Hangover Part II" treads water. It repeats the same scenarios. The writing seems repetitive and often forced (along with the jokes where the punch lines are obvious) and the chemistry between our leads just doesn't click like it once did. Bradley Cooper isn't offensive enough. Ed Helms isn't pathetic enough. Galifianakis isn't quirky enough and when he is it never feels natural. It's a watered down script that rarely invokes the same shock and awe that was expected while desperately trying to recreate a once in a lifetime explosion of all the right elements. Director Todd Phillips takes it on a slightly darker route with his visuals and artistic touches, but its all for naught considering the faulty foundations that its all built on.

"The Hangover Part II" is proof of the carbon copy syndrome. No matter how many times you copy an original, it's just never as good. This film flounders under its forced chemistry and formulaic plot progressions while its three leads desperately cling onto anything to make the film funny. As a once great comedian once told me, "If the joke isn't there, don't force it. Humor happens." "The Hangover Part II" doesn't happen and comes across as pressured to bring the same thing when it already happened. Let's hope the recently announced "Part III" improves from this one's failures.