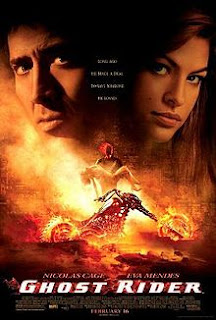 Marvel comics have provided us with some great superheroes. They have also provided us with some of the best antiheroes too. One of these great antiheroes happens to be the bad ass and hell raising Ghost Rider. He’s violent, fights demons and Satan, and generally kicks a lot of ass. The first film to feature the flaming-skull supernatural hero on the other hand does not. It’s wishy washy with it’s style, plays it safe when it comes to the demons and violence, and certainly sucks the life from such an awesome character.

Stunt motorcyclist Johnny Blaze (Cage) watched his father wither away from cancer when he was just a teen. To save his father from cancer, Blaze sold his soul to the devil. Unfortunately, he still has to watch his father die in a horrific crash. Now Johnny is on the run and years later is renowned ability to survive death has made him the best daredevil on the planet. Once again luck is not with him and when the devil’s son Blackheart wants to take over the world, Blaze must become the fabled Ghost Rider to defeat him.

Coming from the director of “Daredevil” (that should already tell you something of the quality that this film will have), “Ghost Rider” completely misses the edge and dark feelings needed to sell the character and story. The tone of the film is very tongue-in-cheek focusing down on the bright colors, comic book motifs, and caricatures of people rather than the darker tones that made the character so cool. This lacking balance of fun to the darkness dumps the general aura of the film down the drain.

To add to the dismal script and the overly complicated for its own good plot, this is one of the worst casted Marvel films. Cage fails to bring the depth of darkness to our hero without it coming off as silly and the supporting cast is abysmally done. Mendes seems to be on autopilot with her atrociously built romantic female lead and our villain Blackheart desperately tries to be menacing only to come across as laughable.

If the cast blows and the story blows, the action of the film better blow everything else out of the water. It doesn’t. Director Johnson places all of his attention at making things ‘look’ cool rather than actually setting up exciting and well choreographed action sequences. The fights between Ghost Rider and the elemental demons are idiotically simple and their execution with the numbingly over done CGI adds nothing to the plot nor does it entertain.

This is handedly one of the worst of Marvel Comics’ films and it ranks down there with “Electra”. It’s long winded and poorly built plot/characters fail to grab the viewer and its action sequences do less than that. It clings onto the idea that it might just be charming, but the only thing that charmed me was the ending credits and knowing that this awful movie experience was over.