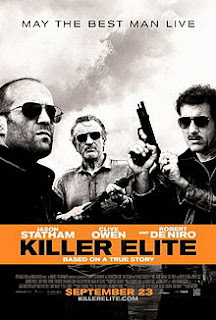 I've said it before and I'll say it again, I will watch anything with Jason Statham in it. When you throw in the ever awesome Clive Owen and Robert DeNiro with him in a film about 1980s world assassins, then you're damn right I'm there. I'm there in my Sunday best with shoes shining and a big smile plastered on my face. Don't be fooled by the trailers for "Killer Elite" though because it's not the action film it was made out to be. It's much more serious than that. More espionage, character work, and plot that half of Statham's movies combined.

Danny (Statham) and his partner Hunter (DeNiro) have been killing for money all around the world for quite some time. When a job goes awry, Danny finds himself disenfranchised with the life and calls it quits to go live the quiet life in Australia. Killers are killers though and soon Danny becomes entangled in the hardest gig of his life. A Middle Eastern warlord has his ex-partner hostage and Danny has to put together a team of experts to take on some of the most highly trained and paranoid British agents out there...the SAS and the ambitious ex-member Spike (Owen).

"Killer Elite" is fascinating film that earns many, many merits. It desperately tries to combine modern action sequences with an old school approach to espionage film making. The 80s feel is mostly done through writing rather than the visual approach that many films try to replicate (something that ironically comes off as a bit disappointing in the end) and the writing is definitely one of its strongest points. The long winding character driven sequences with extensive team building portions and massive plot progressions featuring its story of betrayal and paranoia at assassinating the individuals are what make this film tick. It's thick with atmosphere and lots of tension on how different portions are going to go down and with the charisma of our three leading men (and a shockingly effective secondary cast who easily give the namesakes a run for their money) the film rocks and rolls with the best thrillers in the last few years.

Most of the issues that arise in how "Killer Elite" works, comes from its inability to fully adhere to its style. For a film that was broadcast as an action film with all of these awesome sequences, most of them feel oddly out of place. In a more modern style film they would have worked, the fight between Owen and Statham in the hospital is a great little fight to cuffs battle that blends a realistic tone to the sequence, but the film switches from a long shot, old school approach to suddenly having the shaky camera and quick edits. It's not that the action scenes are poorly done or boring - just the opposite really - but the flow between the story and action set pieces seems choppy.

"Killer Elite" was much better than I expected from it. The trailers portrayed it as a rapid fire action film, but the end result is a finely crafted and tension drawn espionage film that homages its 80s roots with a clever story and great characters. It's definitely one of Statham's better films overall (one that can be placed in the ranks of "Blitz" and "The Bank Job" stylistically speaking) and a definite surprise to this long time fan.