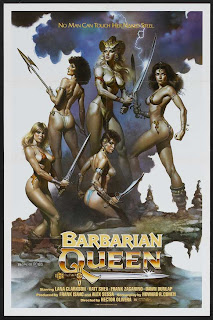 "I'll be no man's slave and no man's whore, and if I can't kill them all, by the gods they'll know I've tried." - Barbarian Queen

Since I finished reviewing the "Deathstalker" franchise, it's due to time to review its partner in crime spin-off series, the notorious "Barbarian Queen" duology. Seriously, "Deathstalker" made enough money to inspire a spin-off series?! It may be hard to believe but yes it's true but don't worry, this franchise is just as bad as the as the franchise that spawned it. 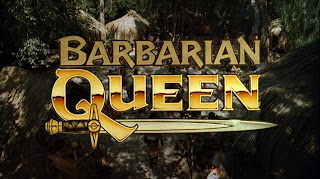 The film begins a violent attack on a village, ala "Conan the Barbarian." Of all days it happens on our Barbarian Queens wedding day. Determined to get revenge for the dead and to rescue her muscle bound fiancée, she heads to the dictators castle to rescue her lover and rid the land of the iron hand of his sadistic ruling.
Fans of "Deathstalker" can rejoice as this is every bit as bad as the film that inspired it... just not quite as entertaining in B-movie sense. "Barbarian Queen" actually takes itself a hair more seriously and is actually slightly better made. This could be a good or bad thing depending on your taste in B-movies. For me I didn't find it as entertaining as it didn't have the unintentional laughter value of "Deathstalker" and it lacks many of the outrageously silly sorcery moments. But don't worry, there's plenty of dumb shit going on here to keep your attention.
Lana Clarkson plays our title character, inspired by the her warrior woman in "Deathstalker". Is it the same character? It's questionable but she plays it the same and let me tell you Clarkson is a feast for the eyes. Tough, deadly and sexy as hell. She's a real looker and an amazing screen presence for a silly little sword and sorcery flick.
Our filmmakers (including Roger Corman as an uncredited producer) know that violence and nudity drive these low budget barbarian flicks and they load this film up with blood and tits, and boy do we get to see Clarkson's on more than one occasion. A torture scene where our heroine get's captured is especially titillating, and hilarious when she kills a guy by squeezing his 'one eyed monster' and throwing him in an acid pit that is just randomly placed in the floor. Take that creepy potential rapist!
"Barbarian Queen" is an extremely low budget fantasy flick and loads up on nudity and violence to make up for its production shortcomings. If you like other films of this nature, like it's inspiration "Deathstalker", than I seen no reason why one wouldn't get some enjoyment out of this brainless flick. Hell it's better than half of the "Deathstalker" sequels that's for sure! A Roger Corman produced S&S flick wouldn't be complete without a sequel and one would eventually arrive as "Barbarian Queen II: The Empress Strikes Back."

Written By Eric Reifschneider
Posted by Cronosmantas at 11:20 PM