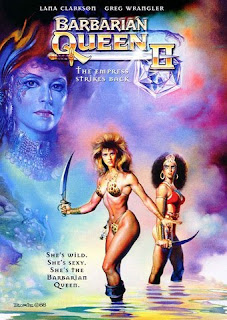 The last thing the film world needed was a sequel to "Barbarian Queen" but being the B-movie enthusiast that I am I still welcomed it with open arms. I mean how could a cheap sword and sorcery junk film with bad acting, low production values, loads of nudity and starring blond bombshell Lana Clarkson not be at least a wee bit entertaining?

The plot has no connection to the previous film... it's just about another 'barbarian queen' (a different character) having to rise up against the corrupt ruler of her kingdom after her father, the king, dies in battle. Since she refuses to let the new dictator have the magic words to gain control of a powerful scepter, she is sentenced to death but escapes to join some rebels to bring down his iron grip on the countryside.
The plot for the most part is the same of the previous film but the setting is more medieval (like 'knights in shining armor') as opposed to barbaric times (aka "Conan the Barbarian"). Typical with later 80s Roger Corman productions, the production values are also lower (which is hard to believe) more on par with the later "Deathstalker" films than the first "Barbarian Queen".
Like the first film (and all other sword and sorcery films from the Corman factory), the film is loaded with nudity. The filmmakers even have the audacity to throw in a topless mud-wrestling scene, as if they're winking at the audience saying "oh yea, this is how low we're willing to go". Hell there is even a topless torture scene of our heroine that copies the original film, so much in fact I had to do a double take to make sure it wasn't stock footage (common in Corman films) and to my surprise, sure shit, it's new footage just filmed in a way that it will be deje vu some viewers.
Unlike the "Deathstalker" films which changed actors in the title role in about every film, "Barbarian Queen II" benefits by having Lana Clarkson returning. She might not be the same character, but she plays it the same and she has the looks and warrior woman presence to help the audience keep the audiences attention, suffering through some of the dire dialogue and stiff acting (one odd bit of dialogue has a man yell "take it like a man" at a woman he is trying to rape... seriously?!).
"Barbarian Queen II: The Empress Strikes Back" delivers nothing new for audiences but fans of this type of B-movie cinema should not expect anything new or groundbreaking. When it comes to filmmaking from a technical standpoint than this is a complete failure and a textbook example of how not to make a film, but all this badness and exploitation elements makes it worth a watch for fans and despite it's lower budget, it really isn't that much worse of a film than the first "Barbarian Queen." Hell I even enjoyed it more than the last few "Deathstalker" sequels.

Written by Eric Reifschneider
Posted by Cronosmantas at 2:12 PM