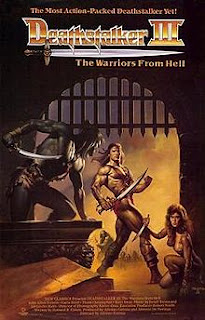 THE WARRIORS FROM HELL

Aka "Deathstalker and the Warriors from Hell"


I will admit, "Deathstalker" and "Deathstalker II: Duel of the Titans" are huge guilty pleasures of mine and are among my all time favorite "bad movies" I have ever seen. Due to this I was eager to see how filmmakers were going to approach the third film in the series: would it be the unintentionally funny outcome of the original or the intentionally self aware spoof of the second? Well to my surprise it was neither, the outcome is just plain and simply BAD with little to no entertainment value. Damn...

The plot has the essential sword and sorcery genre elements which is 1. a princess and 2. an evil wizard. So the predictable plot we get is Deathstalker given half of a magical stone and thus has to rscue a princess from an evil wizard before he finds the other half and brings the whole kingdom straight to hell. Can Deathstalker get past his "warriors from hell" of the title? Does anyone care by this point?

The production values are the lowest possible including recycled music (from "Battle Beyond the Stars"), shit sets, shit costumes (including a guy's helmet that has metal bat wings), shit writing (including a rushed ending), shit editing and the worst fight choreography imaginable. I've seriously never seen worse sword fighting! The end fight sequence looks like it was shot with no rehearsing and the result is just embarrassing.
All these elements are to be expected from an ultra cheap Deathstalker film but where the filmmakers fail is to make it entertaining, even in the so-bad-its-good vain. They attempt to make a 'serious film' like the first film, doing away with the spoof elements of the second, but it just ends up lame and boring.
This being the third Deathstalker film this of course means our third actor to portray the title character. John Allen Nelson' approach is, not surprisingly, completely different than the two actors before him. Deathstalker in the original was an unlikeable brute that went around the countryside raping and taking what he wanted. Deathstalker in the second film was a smartass young guy with charm. Here he's just a forgettable cocky hero and easily the least interesting of all the actors that have played the notorious "Deathstalker" character.
The only aspect I can praise this film for is that it doesn't have ANY stock footage from the original "Deathstalker" played off as new scenes. Sure it has a few split second stock scenes, like a quick clip from "Deathstalker II" and a castle flash from "The Raven", but for the most part it's a completely new film. For that I give the filmmakers respect for they at least gave us a completely new picture, even though it still isn't worth watching.
I was extremely disappointed by "Deasthstalker III" (or "Deathstalker and the Warriors from Hell" as the title says in the opening credits). I was expecting a low budget fun time and ended up getting a grating film where everyone involved just seemed interested collecting a paycheck instead of making an entertaining B-movie. Ironically this was the only entry in the series to be featured on "Mystery Science Theater 3000" despite being the entry in the series the least entertaining to poke fun at. It is also the most obscure of the entire series and hardest to find on DVD. I had to buy an import from the Philippines... who knew I would be so disappointed after all that hard work trying to find it!

Written Eric Reifschneider
Posted by Cronosmantas at 10:39 AM