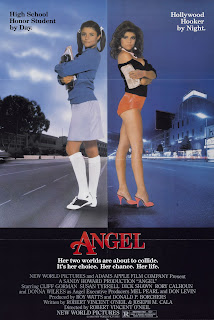 By 1984 Roger Corman had sold his company New World Pictures in order to start his other film company Concorde Pictures.  Even with his presence and infinite wisdom gone the remaining team at New World had enough experience making entertaining cult exploitation pictures to still produce likeable cult ventures, without the guidance of Corman, proved by the 1984 sleeper hit "Angel". 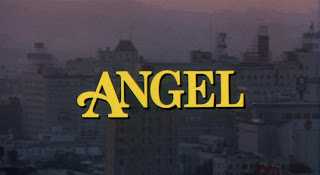 The name angel refers to the street name of our main character Molly Stewart (Donna Wilkes). Honor student by day, she hustles the streets of Hollywood Blvd by night to pay the bills after being abandoned by her parents. Shit turns worse when a serial killer starts brutally murdering her friends and she goes all Charles Bronson to take her revenge. Can a vice cop help her catch the killer while at the same time convincing her to get off the streets for good?
For an exploitation picture, "Angel" is relatively well made with some good actors well handled by director Robert Vincent O'Neill. Sure the dialogue and gratuitous nudity can get in the way of its story telling (imagine an exploitation film doing that?!) but O'Neill is still able to craft empathy for our main character and her questionable moral decisions to get by.
For me the best part of "Angel" is the quirky secondary characters that aid Angel in her goals and ambitions. We get Dick Shawn as the witty transvestite Mae, Susan Tyrrell as the Jewish dyke apartment manager Solly,  Cliff Gorman as the respectable empathetic vice cop (with a crazy eye) and Steven M. Porter as yo-yo street entertainer Charlie. The real winner though is Rory Calhoun as Kit Carson, a loveable snile ex-western actor turned street entertainer. He totally owns the scenes that he is in.
What helps "Angel" is that it strives to be more than just merely another exploitation picture by providing the audience with empathy for our lead character, a suspenseful killer and even some good old fashioned vengeful action with colorful secondary characters. At it's heart it's still an exploitation picture with some silted dialogue and a few subplots that go nowhere (what happened to Angel's guidance counselor?) that keep it from being better. "Angel" really struck a chord with the grindhouse audiences who in turn made the film a modest hit, paving the way for four sequels: "Avenging Angel", "Angel III: The Final Chapter" and "Angel 4: Undercover".