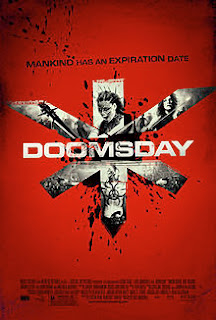 Neil Marshall wowed us with his low-budget werewolf modern classic "Dog Soldiers" and scared us shitless with the brilliant "The Descent", but its his third film "Doomsday" that is his true homage to 80s genre film making. Unfortunately, its also a film that is littered with massive plot holes and a horrible flow to the film as it throws in barrels of references. It leaves this reviewer loving the film for its nostalgic factors, but feeling unfulfilled with it as a film on its own.

When a virus decimates much of Scotland, the authorities decide to quarantine the zone from the rest of the world. They build walls and leave the diseased in there to die. Years later its come to the attention of the authorities that many have survived in the dead zone and when an outbreak of the virus spreads beyond the quarantine they send in an elite squad of soliders lead by the ass kicking one eyed Sinclair (Mitra) to find a cure and get out alive before the whole world succumbs to this modern plague.

On a personal level, I fucking love "Doomsday". I grew up watching all of the films its homages including "Escape From New York", "Excalibur", "Road Warrior", and the zombie films its initially pulls from. So seeing the same style music, sets, characters, and even fonts shoots straight for the heart of this cult film fan. The gang fights, the crazy villains (including a stunningly fun performance from Conway as Sol), the intense road chases with high octane crashes, and the brutal medieval fighting all gear this film up with some stellar action set pieces that any action fan will love to watch. Punctuate this with a heroine that's a combination of Ellen Ripley and Snake Plissken of badassery than its simply hard not to love this film on many levels.

Despite having all of the details right, the overall vision for the film is significantly flawed. It just never blends and the flow for the film never gets going. The script is so plot hole ridden with odd moments and awkward transitions (here's looking at the entire medieval sequence and how little it makes sense in the overall spectrum of the film) that even all of its awesome elements couldn't over come it. It spirals down into cliche storytelling and leaps of logic that could never make sense even in the world of this film. It's these problems that ultimately pull it from a four point film to a two and a half one.

"Doomsday" will find its cult audience with time (and it somewhat already has), but those who look for more than just homages will succumb to its poor writing and awkward acts. For its homages though, its a must own and must see for cult fans. Here's to hoping that Marshall makes Sinclair a franchisable action star in the future despite the film's critical and financial failures.