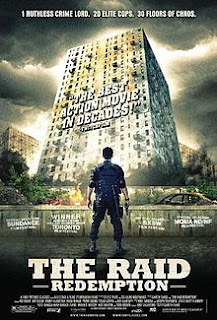 Now that action films have come back to what made them good in the 80s and 90s (you know charismatic heroes, extensive fight/action set pieces, great gimmicky villains) thanks to the likes of returning vets like Stallone, Lundgren, Van Damme, and newcomers Statham, Jaa, and Vin Diesel, the US is getting behind the "let's watch things blow up and get the shit beat out of them" phase. Hence why a foreign action/martial arts film like "The Raid: Redemption" gets a fairly wide release here in the United States. Thank you Sony Pictures for making that possible and thank you Gareth Evans for giving us such a brilliant work of kick-assery.

When a SWAT team gets the call to take down a ruthless drug lord on his own turf, a multistory dilapidated complex used to house fugitives, killers, and drug runners, the rookie Rama (Uwais) seems set to make his mark as one of the best that the SWAT team has to offer. What he doesn't know is that there are different reasons for this raid and not all of them are legit. Now he and his team are going to have to survive and fight their way out of this massive trap.

"The Raid" has everything that made 80s action films so much fun and so intense. It keeps its story to a minimum (after an initial intro to our lead, we leap right into the SWAT van taking the squad to the building), throws in a few twists for the fun of it, focuses on creating intense sequences of action, and lets the charisma of its lead carry the rest. No, its not going to win an Oscar for anything - but if they had an Oscar for bad-assness in a film then "The Raid" would be a shoe in.

The film is simple and like what "The Protector" did for Thai action films and Tony Jaa's career a handful of years ago, it builds on the fact that its lead can fight. That's what they let him do. After an initial and very intense gun fight to kick off the film where the body count hits double digits within minutes, (and they blow up a fridge with a grenade and gas tank just thought you should know that) the film pulls away from its higher budgetary sequences and let's Uwais do his thing. Which happens to be lots of kicking ass martial arts style. This is where "The Raid" truly shines. Yes, the writer/director/editor Gareth Evans adds just enough artistic flair to give the film some depth with its moments of betrayal, silence, and built up tension, but its the very long and beautifully choreographed fight sequences that take the breath away. Knife fighting, some baton whapping, and lots of flying fists and feet consume the film with brutality and swift movements. It's like an action fans wet dream of skull cracking and throat slashing!

Simple put: "The Raid" is easily one of the best action films to grace the silver screen in the last ten years. Along with throwback films like "The Expendables" or the previously mentioned bone breaking "The Protector", any self respecting action fan needs to support this film and those involved. Uwais could very well be the next big action star and if the writing and directing of Evans tells one anything - this could be a whole new era of kick ass films.